2010 Infiniti EX Pros and Cons at TrueDelta: Used EX35 Love it ...but Jury is still out becasue only Dealer is 100 miles away. by Tacobella

In 2010 I spied an 08 G37 Journey I could not come to terms on a deal with and instead bought a Honda Accord EX-L Coupe.

TERRIBLE car ride harsh, noisy drove it on a 1200 mile trip and traded it key to key with a loaded 08 Tacoma TRD to stop the depreciation. I recently sold the Tacoma privately for $6000 more than I would have recieved for the Honda on trade ( and $3500 over dealers ACV trade value) , wiped my brow whew!!

I then set out to look for a smaller wheel based SUV. Discovered the EX35 browsing the net and decided this was a "Practical" "G37 Coupe". Found the "Internet prices" were $27,000 for the 2010 Journey with everything except the adaptive crusie tech package. (apparently not too many ordered this one) I decided against dealer purchase (as I always try to do) and found one privately for $23,800 cash after asking a friend who is a Nissan Service Manager to run auction prices which came in at $22,275 for the same mileage Journey) I was not sure I would keep it becasue the Infiniti dealership is 90 miles away and there was still almost a year of Factory warranty left However discounted Extended Service contracts are available from out of state dealers. But my servicing dealer was not all that impressive on my first visit for an issue with a squeaking radiator fan motor.

Interior is VERY nice. Lots of soft touch. Premium package includes upgraded interior materials as well. Extremely comfortable. Leather is soft and liable and easily cleaned. Lots of padded surfaces, BAck seat is about as cramped as a Mustang convertable. Great car for single person or second car for couple with kids. I ususally keep the back seats down to keep the leather clean and enjoy more cargo area 47 Cubic feet. Better to open the back door and put something on the cargo bed rather tha the seats, Exterior Styling is "ok" Nothing that stands out (which I prefer) and you don't see 10 of them in Costco parking lot. People ask me what it is. I tell them its the new Nissan Rogue EX35. I like the fact that it does not come off as a pretentious luxury car. From the front seats forward it may as well be a G35 Coupe.

BEST stereo in any car I have heard (11 Speaker Bose) My brother has a 2013 LS650 Lexus and this little unit blows that away for clarity and balance. Just the right amount of bass and ajustments. If I bought this car new I would go for the Premium package again Much better stereo. BT, NAV and iPod are flawless with Android and Ipod Classic, Nav was easy to use, waether updates are nice to have, and has a lot of great features, I took my Garmin just in case but never needed it. Just upgraded the Infiniti NAV at home for $139. The ALL Around camera system is fantastic for parking.Four Camera system can be used going forward or backward. Every car should have that. Works going forward as well up to 4MPH. A feature I LOVE when pulling into my garage,

This is not a car for those who want 30MPG. It is a powerful engine and MUCH more power than I will ever need. Wish it came with a small hitch to pull a U Haul and my bike or pick up that 70" TV at Costco. Its that powerful. The rear bumper assembly is to thin IMO to put a hitch on. Thinner steel than any hitch available. So I will rent a Van for that TV. And aacually ride my motorcycle. The rear bumper sin is attached to a thin stress member. I would not put a bicycle hitch on this car but its doable, I have had this car up to 130 MPH and it wants more. Passing an 18 wheeler (whcih I do to keep their stone throws to a minimum is an exhilerating experience, and I am at 100MPH before I reach their front bumper. YIKES! Manual shifting is fun but i really don't use it. I will say the G37 Sedan I recived as a loaner is even more peppeir and has a very nice exhaust tone. I would bet the new EX or Q37 whatever they are calling it with the 3.7 and seven speed is even nicer

Cargo capacity seems to be an issue in most pro reviews, I don't get it. There is a LARGER model available. This is a great around town shopping car. Enough cargo capacity for the $100 mandatory expenditure at Costco. Even a few bags of mulch. Back seat room is not an issue . We have a RAV 4 for that needed room and the extra cargo if needed. People who buy this car may have small children or are a older couple with a Marquis for those Bingo nights limoing with their living friends, If I needed cargo capacity I would have kept the Tacoma. There is nothing I personally put in the Taco I could not carry in this EX. Albeit I have to worry about keeping it clean with a Tarp. Guess I don't need a whole lot of cargo. I will rent a truck if I need one. In the mean time its nice to have a car I can park in my garage WITH my bike behind it and still walk around it and the wifes RAV,

Controls are "ok" Its a long reach to the NAV and Control panel for these arms but the Voice system makes up for it. I would love to have the car auto lock when leaving it. I forget about the key Fob becasue of the push button start, So I hit the little button on the door to lock it.......oh the pain..Controls are easy and their a re LOTS of options. One can get lost in setting this car's easy control system setup. In a fun way, BT and iPod hook ups are flawless with my Ipod Classic and Android Note 2.

Not very happy with Infiniti service so far. I brought the car in for a multi point inspection (free) and the radiator fan was making a little squeaking sound "noted by techs" when it wound down after the car powered off. Infinti service advisor AND a tech heard it and told me they would order the part and would have it in a few days and I cold wait for 2.5 hours or get a loaner. GOOD! Impressive so far........ When I went back a week later they had not ordered the part becasue it cost over $500 and the"lead" tech "had to verify the noise"Needlesss to say after driving 90 miles I was not happy....Especially since the noise was not present when he came out to hear it. My thought is, if they cannot trust the tech who actually heard the noise (with the service advisor) was going to FIX it, why would they not trust him to have heard the issue and pinpointed it?AndWhy would the service advisor neglect to call me and tell me they did not order the part before I drove back down? Not very good service or confidence building in their technicians. Lexus service is MUCH better. One tech verifies and issue and they FIX it now and satisfy the customer. Infinti does not seem to want to live up to that level of service on parts over $500 anyway. I expected more from Nissan's "premium" brand service department. In fact this is the only reason I am considering selling this wonderful car. Service is everything with premium brands. Not impressive in this case. They finally did fix the issue and gave me a G37 as a loaner. I have since sold the car. Not becasue it was a bad car. But beacuse warranty service is 90 miles away and incinvienient.

OK This is NOT a car to buy if MPG is important although I am getting over 23 MPG avg. It is a POWERFUL car with a great drive train ready like a race horse at the gate to giddy up and it does when you need it on premium recommended fuel....in spades. I don't drive enough to care about fuel economy all that much. Not an econobox.

I would not consider adding a towing hitch to this car after viewing the frame part upon which it would be mounted.

Anyone who has owned a Mustang converatble wll undestand the issues with rear seats in this car. I keep the seat backs down and drive as a two seater. Also Some may find not enough storage bins and cup holders are a tad back for those of us who have shorter legs. But not a deal breaker.

Brakes are very strong. Confidence inspirering. Although mine tend to squeak.

Ride is very smooth for a short wheelbase. Solid feel to the handling. I have the RWD and traction control works great. I would not get the AWD in this car. It is to sporty to kill the HP with AWD. I would drive this in snow. I had muscle cars years ago with RWD only and if you know how to drive in snow they would not be an issue. AWD cars give people a sense of invincibility and those are usually the ones seen in the ditches on the side of the road.

I have the car serviced at Nissan and will be buying a discounted Service contract from an out of state Infifnti dealer becasue I belive $1000 for 3/36 at the end of the car's comprehensive warranty is money well spent especially if I go to sell the car privately. THAT is where you get your money back. People will buy a car privately at a $2000 discount to lot prices especially if they have a FACTORY transferablke no deductable exclusionary warranty. In the interim I will get $2000-$3000 over Actual Cash Value from a trade deal. Paying for the warranty AND extra money as well. I have done this with all my vehicles and only buy vehicles with dealers who offer out of state discounted Factory Service contracts, Honda, Toyota, Nissan products in particular. Savings are huge. Easy to find them by reading brand specific enthusiasts forums. Scheduled maintinace is expensive if Infinti does it. Much beter to have Nissan do it and learn to change your own cabin filter. Its a little more involved in this car but will save you 30 minutes in labor costs,

Excellent from motor to road. Smoooth transmission shifting. Instand response. Reminds me of a race horse at the gate. it really "wants" to go. I have to keep myself in check to get the good gas mileage as Infifnit reccomends Premium unleaded for best performance and thats what I put in it...(most of the time) In the Wintoer one can get way with 87. but in the heat you will want to run premium to avoid the possibility of engine pre ignition pinging.

One of the things I like about this car is it does not scream pretention like Mercedes or even Lexus. It is understated luxury (much to Nissan's aggrivation I suppose). It's not a car one would but if they wanted to show how "successful" they are and I like that. People I know that have had the Infinti love them and rarely had issues. But yeah they are the back sheep of the big three sub luxury brands. Acura may have more snob appeal.

Would feel a lot better about owning this car if dealer was not 100miles away for warranty work. My first experience with warranty service was poor as well. That is the only thing that would make me switch out to a another brand with local dealerships and better service.

More About the EX 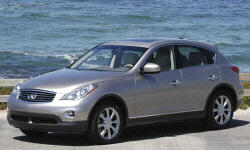 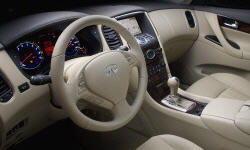