I had heard that the new Mazdas were a bit... different than the cars of old. I decided to take one for a drive and find out what's happened to them.

First impressions: Wow. This is different. Smooth, quiet, refined... is this just a rebadged Audi? No? Wow, Mazda's really changed.

If Inspector Gadget ever decided to upgrade from his '83 Toyota Supra Gadgetmobile, he'll probably buy a Mazda. I haven't seen this many gadgets since CES a few years ago. Granted, I was driving the $25,000 top-spec Touring S, but for that pricetag, you get Radar Cruise Control, a speedometer HUD(!), Keyless Entry & Start, Rearview Camera, Blind Spot Monitoring, Swiveling Front Headlights, Rain-Sensing Wipers, Automatic Braking (If an obstacle is in the road), Plus a very intiutive 7-inch touchscreen with Mazda's infotainment system.

Mazdas have always been good driver's cars, and although the most recent models have been trending up-market in the luxury department, underneath they still retain a great amount of chuck-ability. Throw it into a corner, and you'll come out on the other end smiling. What impressed me the most, however, is that even with the responsive handling, the ride was very smooth and refined - the stiffness and damping reminiscent of a fast BMW or Audi.

Even with the 2.5L 'S' Option, the Mazda SkyActiv tech gives the Mazda3 a very impressive 28/39MPG. The 2.0L standard option gives 31/42. That's pretty standard in most new cars, however the performance for that economy is well above average. Good engines, these are.

You get great refinement for your money, too. The interior quality is very good - nothing feels cheap or patched-together. It might not be as smooth and sleek as some luxury cars, however it is evidently built to last. A peek into the engine bay shows well-made aluminum components, and some pretty smart design.

I had to fight over which positive category to fit here. I could've mentioned the stunning quietness, the great cargo capacity in the back, and the superb warranty and durability, but I ended up choosing exterior styling. Because gosh, this car looks great, in my opinion. Some purists might bash it, but the clean, sharp, agressive exterior design certainly keeps up with the rest of the well-designed elements of this car.

The most disappointing thing about the car, actually, was the ride smoothness. To some, that might be a very desired trait. And, for its handling, the ride was great. However, it did feel somewhat artifical and dampened. It corners very smooth and steady, more reminiscent of an Audi. I expected this to be more of an intimate experience like a Subaru or Honda.

Although the sleek hatchback looks great, it did limit the rear visibility somewhat. However, that's the only issue - otherwise the car has great natural visibility, augmented by a plethora of safety gadgets.

A few notes about the powertrain: The engines are smooth and have decent power delivery, but are nothing special. This is more evidence of Mazda's attempt to move upmarket. Gone are the days of snappy, revvy Mazda Protoge models. The transmission, however, is very good. When set to 'Sport' mode, the optional paddle shifters do give stern commands which the transmission obeys better than most. Also, I've heard good things about the manual transmission, but the MT is only available on the 2.0L standard engine, not the 2.5L sport.

Another word about quietness. This car is refined and eerily quiet. That definitely shows some effort on Mazda's part - and it works well.

This car definitely wasn't what I was expecting when I got into it. Whether it's better or worse? I'll leave that up to reader to decide. Mazda's execution in the pseudo-luxury department was nearly flawless. However, deep inside, as a driver, I miss the old Mazdas. However, the modern replacement fills the void in its unique flavor.

I can't provide a great comparison between all the competitor's mid-size cars but I've driven a few of them recently:

Ford Focus: The handling & performance are on par with the Ford Focus, with the Mazda also carrying what felt like more overall refinement.The Ford also has a very poor infotainment system, and overall poorer construction. It seems like Ford aimed for what what Mazda was doing, but only Mazda got it right.

Toyota/Honda: This is a very different car than Toyota's or Honda's midsize options. They have equivalent levels of comfort and gadgetry, and also very superb build quality. Niether of those, however, you can call driver's cars. They're pretty boring compared the Mazda.

Germans: I keep referring to an Audi when writing about this car, and it's hard not to, because that's what it feels like. I'm starting to think Mazda actually was going after VW with this new year. Although I've yet to drive a 2014 Jetta or Golf, I have a good idea what to expect. Although, until I drive one, I can only speculate on how the the Jetta and Mazda3 compare.

All in all, it's one of the more superior driver's car options, that still has practicality for an everday commute.

Another good review. I find I often recommend the Mazda3 for the reasons you mention.

More About the Mazda3 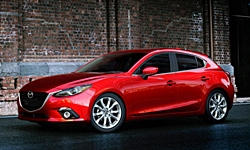 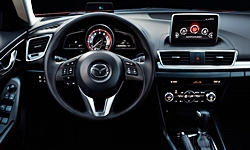