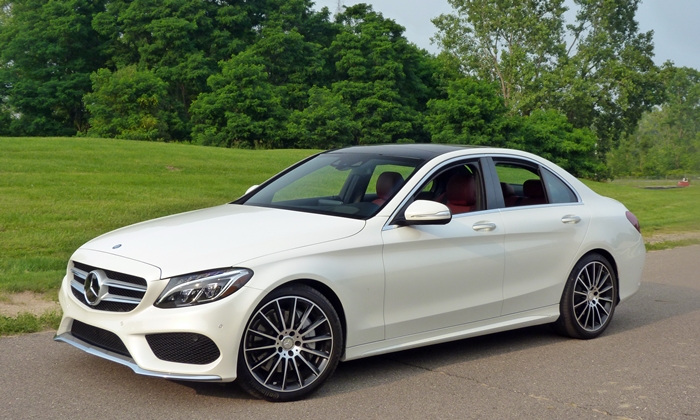 Back in the 1980s, a Mercedes-Benz was unquestionably the best engineered, most prestigious car bought by regular folks. Then the arrival of Lexus drove Stuttgart to question just about everything. Timelessly conservative styling? Austere but durable interiors? Engineering without regard for production cost? All were tossed. The new cars had more eye-catching exteriors and interiors, but didn't seem as solid and did not hold up as well post-warranty.

This trajectory culminated in the new-for-2014, "from $29,900" CLA-Class. While I enjoy the baby Benz's relatively agile handling, it simply doesn't look or feel like a Mercedes. That same year, though, Mercedes introduced a new, upgraded S-Class flagship that essentially proclaimed, "Benz is back."

Not feeling the need for a sedan as large (or as expensive) as the S-Class? For 2015, the compact C-Class has been redesigned. A mere glance at the new car suggests that it shares far more with the S than with the CLA. But does the car deliver on the promises made by its styling?

Could be sportier, but undeniably elegant. more C-Class photos 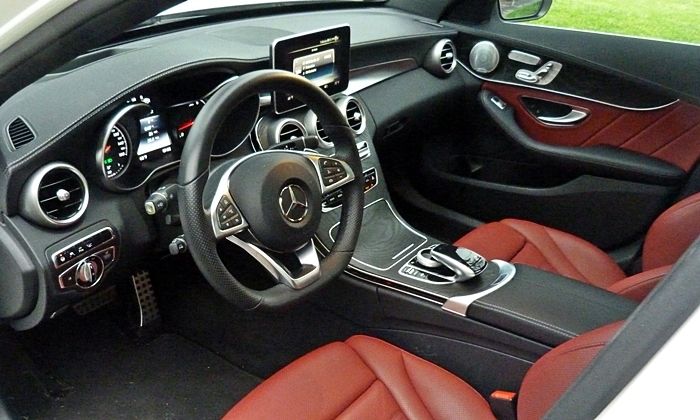 The interior of the new C-Class is drop-dead gorgeous, especially in red and black.

Mercedes-Benz has been walking a tightrope. On the one hand, many people who thought nothing of buying an Audi or BMW couldn't quite see themselves in something so lofty as a Mercedes. On the other, attempts to counter such perceptions risked damaging the brand's equity. Despite some missteps over the past two decades, Mercedes-Benz has managed to avoid both Scylla and Carybdis. More people than ever perceive a Mercedes as a car they could own. Yet it retains more prestige among the general population than Audi and BMW.

The new C-Class has further enhanced Mercedes-Benz's reputation. On the road, it exudes the vault-like solidity that historically distinguished Mercedes from regular cars. Plus, at a time when everyone is striving to upgrade the perceived quality of their interiors, that of the new C-Class sets a new benchmark. It's nearly as nice as that in the flagship S-Class, and many cuts above that in the CLA. 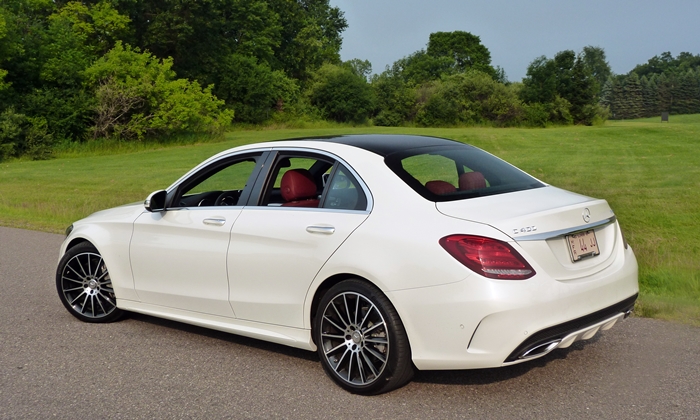 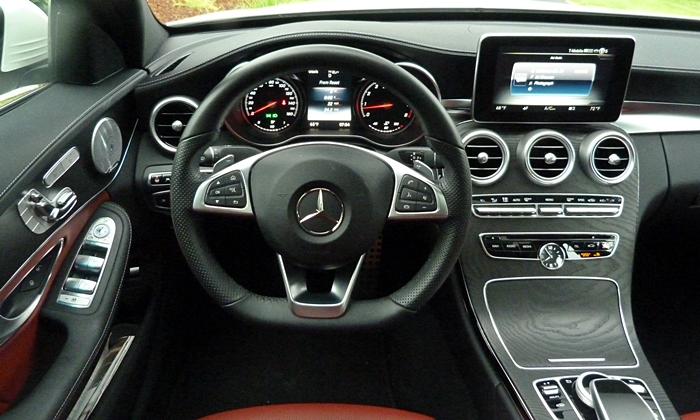 Complicated controls, but most aren't difficult and all are pretty.

The interior of the new C-Class isn't only solidly constructed, but beautifully designed. So much brightwork and wood could have made for a busy, overwrought mess. But the many, many elements could hardly be more harmoniously integrated into a visually impressive yet tasteful whole.

Some people don't like infotainment display screens that look like an ipad tacked onto the top of the instrument panel. But this permits the screen to be located where it is easiest and safest to view without making the entire instrument panel overly tall.

On the outside, the new Mercedes-Benz C-Class looks like the latest S-Class, just much more compact. Compared to the plain, boxy 2008-2014 sedan, the new car appears much more elegant, with complex flowing surfaces draped over its curves. The new body might even be too curvy given its 184.5-inch length, with a rontund heaviness from some angles. But it certainly looks far expensive than its predecessor, and than competitors.

For those seeking sportier, edgier, more overt styling, Mercedes offers the less expensive CLA and Cadillac offers the ATS. The latter looks somewhat like the old C-Class from the side, but with tighter proportions and racier lines. But it can't match the Mercedes-Benz's elegance.

You can get more features on the new Mercedes-Benz C-Class than on any other car in its class. The tested car had nearly all of them, including all-wheel drive, an air suspension with adaptive dampers, dynamic auto-dimming full-LED headlights, a panoramic sunroof, a head-up display, heated and cooled front seats, hands-free trunk access, all-speed adaptive cruise controls, and a full array of collision warning and avoidance systems. Not present, but available for $350: a fragrance atomizer like that introduced with the new S-Class.

I'm reluctant to list handling among the reasons to not buy a Mercedes-Benz C-Class. Compared to past compact Mercedes, the new car handles significantly better, with a level of composure, predictability, and precision that only BMW used to offer. Few buyers will wish for a car with greater handling capability.

But the new C-Class doesn't feel light and agile, at least not when fitted with the C400's turbocharged V6. (The lighter, four-cylinder C300 could feel more nimble, especially with the standard rear-wheel drive.) My notes refer to the C400 as "a compact tank." This is partly because, at over 3,700 lbs., it's far from light. Not that the current Audi and BMW are lighter. They aren't. The BMW weighs about the same, while the Audi tips the scales at nearly two tons. The Cadillac ATS weighs less, but only by about 100 lbs.

What counts more than the specs: the Cadillac feels lighter and more agile. Tuning matters, and Mercedes did not tune the new C-Class to feel nimble or (to borrow a German PR clich?) dynamic. The firmness of the suspension and heft of the steering can be adjusted using multiple modes, including one that can be thoroughly customized. (I love this, as you can have firm steering and/or a firm suspension without forcing the transmission to waste gas by holding the engine at a frenetic RPM.) But these adjustments do not alter the basic character of the car. Even in Sport+ the steering and suspension maintain their distance from your synapses. In turns the attitude of the chassis rarely varies from mild understeer.

Stuttgart likely intended all of this. Those seeking the heft and solidity for which the S-Class has been renowned, just in a more manageable package, will find exactly what they're looking for in the new C-Class. It's only a much smaller group of hardcore driving enthusiasts who might be disappointed.

Even these enthusiasts might not remain disappointed for long. For 2016 Mercedes is replacing the C400 (after just a single model year) with the C450 AMG. The new variant has sportier suspension tuning. Whether it feels more agile I cannot yet say, as I haven't driven it yet. 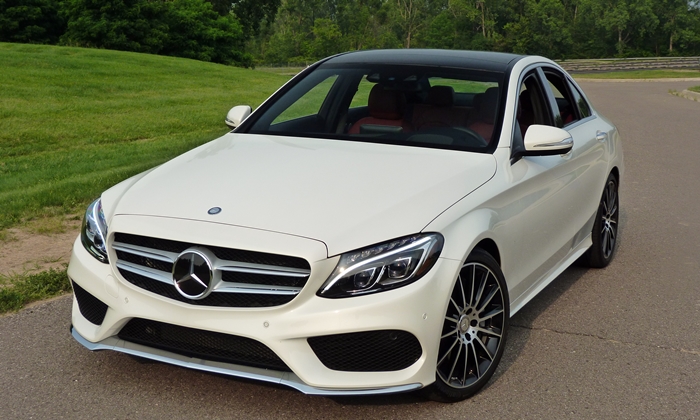 Big star in the grille indicates sport trim. Full-LED headlamps are part of a Lighting Package. 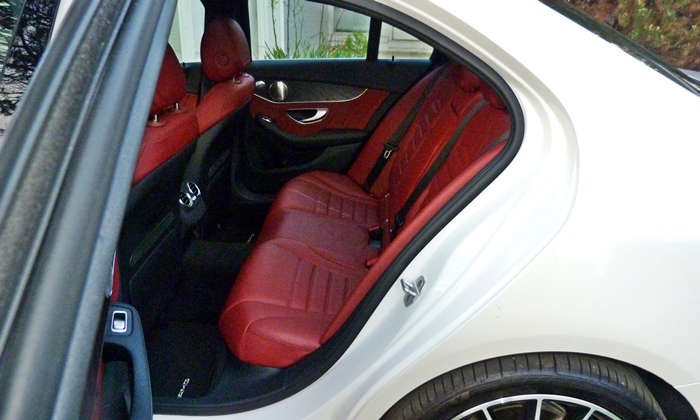 With two more inches of legroom, the back seat is now adult-friendly.

If I'd had another "why to buy" slot, powertrain performance would have filled it. At every level, Mercedes-Benz fitted the new 2015 C-Class with engines that match or beat competitors' performance. This could not be said for the engines in the 2008-2014 car. At the bottom of the range, a 201-horsepower turbocharged 1.8-liter four (with RWD) or a 248-horsepower V6 (with AWD) have been replaced by a 241-horsepower turbocharged 2.0-liter four (with either RWD or AWD). Reflecting the healthy performance bump, the base car is now badged a C300 rather than a C250.

Not quick enough? Feeling the need for more than four cylinders in your compact luxury sedan? Moving up the range, the C350's 302-horsepower 3.5-liter V6 (with RWD or AWD) has been replaced by the C400's 329-horsepower turbocharged 3.0-liter V6 (only offered with AWD). With this last engine, the new C-Class accelerates very quickly--magazines report zero-to-60 times under five seconds--but with little in the way of sensation.

The new boosted V6 is actually most noticeable at idle, where it is far from silent and sounds a bit like a diesel. This isn't uncommon among recent direct-injected engines.

Apparently, Mercedes-Benz decided that 329 horsepower were not sufficient. For 2016, the C400 is gone, replaced by a 362-horsepower C450 AMG. Audi and BMW don't yet offer direct competitors to the new car. The new 340i is rated for a mere 320 horspower. A 354-horsepower updated Audi S4 won't arrive until next year.

Still not enough? Then Mercedes also offers the C63 AMG with a 469-horsepower turbocharged 4.0-liter V8 and rear-wheel drive. The transmission in all cases is a seven-speed manually shiftable automatic.

The Mercedes-Benz C-Class's new engines are also more efficient. EPA MPG ratings range from 25 city, 34 highway for the C300 (with RWD) to 21/29 for the C400 to 18/25 for the C63 AMG. In my suburban driving, the C400s trip computer usually reported averages in the mid-20s, quite good for a powerful all-wheel-drive car. On a 70-MPH highway the trip computer reported a two-way average of 29 MPG, spot on the EPA estimate.

The Mercedes-Benz C-Class's highly adjustable front seats provide proper support, but aren't especially form-fitting and aren't cushy enough to feel luxurious. But then neither are those in key competitors. One possible shortcoming, depending on the dimensions of your midsection: unlike in the BMW and the Cadillac, the side bolsters of the C-Class's front seats are not adjustable.

Driving position remains a C-Class strength owing to an instrument panel that (unlike that in the CLA) isn't overly deep and windows that haven't been reduced to stylish bunker-like slits. Though I felt a little buried with the driver seat in its lowest position, raising the seat fixed this.

Rear legroom in the Mercedes-Benz C-Class increased by almost two inches for 2015, such that it nearly ties the best-in-class BMW. Unlike in the tighter Cadillac ATS, one average-sized man can sit behind another with some room to spare.

The Mercedes-Benz's trunk is about average is size. The BMW's trunk can hold more, but the Cadillac's cannot hold as much.

The C400's suspension soaks up bumps well while maintaining the car's line, but can't quite manage the mass of the optional 19-inch wheels. The upward and downward motions of the standard 18-inch wheels might be less evident from the driver's seat. If not, then those seeking a cushy ride should stick with the C300.

The C400's body control is at least better than that in the current BMW 3 Series, while its suspension feels less firm than that of the Cadillac.

In sharp contrast to the CLA, the impressive new Mercedes-Benz C-Class is as worthy of the three-pointed star as the S-Class flagship, which it strongly resembles in both style and character. In terms of perceived quality, elegance, features, and overall competence, no competitor can touch it.

The only possible deal killers are a fairly high price, not-so-sporty handling, and unknown reliability (since so much of the car is new). But these days a BMW 3 Series or an Audi A4 / S4 is just as expensive, while handling little if any better. The Cadillac ATS does feel more agile, but doesn't have as well-crafted or as roomy an interior, and isn't much less expensive. As they've become more complex, no car in the class is a sure thing for ten-plus years, though the Lexus IS is probably the safest bet.

For all but those whose top priority is agile handling or who require proven long-term reliability, the Mercedes-Benz C-Class, an also-ran within the compact premium sedan segment for three decades, has become the one to buy. 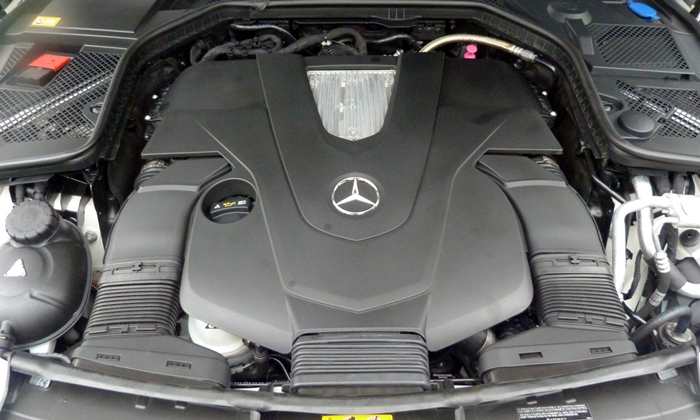 Pop the hood, and all you see is a bunch of black plastic. 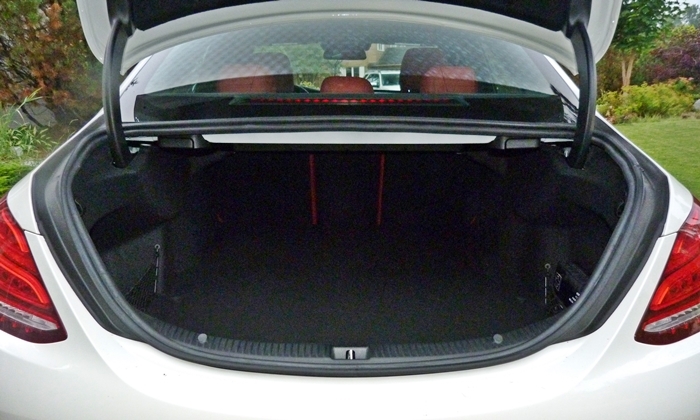 If you were expecting the car's bobbed tail to magically include a large trunk...about average.

Mercedes-Benz and Cadillac both provided insured cars for a week with a tank of gas. Elizabeth Duperon at Suburban Cadillac of Ann Arbor (734-327-1792) provided a test drive in a V6 AWD ATS.

This car truly does feel like a baby S-class .

Hopefully Mercedes does the same job with the E-class redesign.

This car is interior is so satisfying that it's one of the few times that I actually don't care how powerful the engine is.

Mercedes was brilliant to release both the CLA and the C-class to capture buyers in both price markets .

I liked the interior "sport" trim of the AMG version, but found the bright White/cashmere/piano-black trims to be more satisfying.

I'm sure there may be people out there that do, but around here, I absolutely can even imagine anyone crosshopping a C-class with an ATS.

The namebadge and interior alone sell the car.

It could have a regular 4-cylinder engine and still sell like pancakes.

More About the C-Class 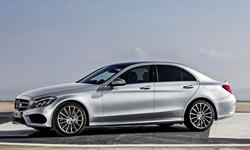 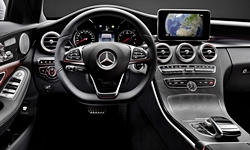