Loved it when it worked, hated it when it didn't. In the end, its fate was sealed when I was rear ended by a Land Rover and the trunk was folded into the car.

I think that the B7 Avants are one of the best looking avant models in Audi's lineup. Despite being 10 year's old, it certainly has aged well.

2.0T was great on the highway and in the city. Never seemed to feel too underpowered when you needed it.

Above average quietness in the city and on the highway. Lots of soundproofing in the door panels, and in the dash, and it certainly makes a big difference.

Best thing about the Avant is that you're able to store lots. The roof rails are excellent when paired with the cross bars and cargo carriers for bikes and roof boxes.

Excellent build quality especially in the cabin. Dash and touchable interior surfaces were all soft and durable. Aluminum trim was a nice touch.

Horrible fuel economy in the city. If you are a spirited driver, do not expect decent mileage in the city despite being a 4 cylinder. If you do a lot of highway driving, it may be more acceptable, especially if you don't accelerate too hard.

The longitudinally mounted engine with the torsen differential means that a majority of the engine hangs over the front axle of the car. Understeers like a pig, especially when you compare with a BMW 3 series.

I had a lot of unexpected problems with the vehicle. Perhaps it was my luck, but I certainly wouldn't have purchased the car if I knew how much I was going to spend on repairs. Turbo failure, oil filter housing failure, PCV assembly failure, rear brake failure, rear spring cracked in half, to name a few. I only had this car for 35,000km!

Bose amp was finicky and occasionally cut out. There was a workaround to bring it back, but it was annoying. I pulled out the amp and found that water from the rear window (amp is located in the passenger side cargo wall) had caused a bit of corrosion on the connector. Fixing would have meant replacing the amp an the corroded wiring.

The S-Line was not ideal for anything less than a slightly bumpy paved road. I took the car onto a graded gravel road (nothing major - a frequently used access to a popular hiking trail) and found that the long nose and relatively low clearance made for some cringe-worthy scrapes along the way. If you want to go into the wilderness for a hike or into even car camping, be very careful. You were warned!

Cramped, at best. The long nose and emphasis on frong driver/passenger meant that the rear passenger seats were largely an afterthought, in terms of space. Very much a driver oriented car.

Excellent braking, despite the front-heaviness.

Lots of storage compartments in this vehicle. Armrest, under seats, glovebox, hidden storage, door storage... you name it! Excellent for a small-ish car.

I don't recommend getting this car without a solid warranty that can cover a variety of issues. Electrical, powertrain, brakes... I had issues with them all DESPITE the low mileage (kilometerage?) this car had when I purchased it. If you're brave and want to take that chance, then I suggest it is only for those who are:

a) willing to do a bit of wrenching on their own to save some cost. Engine bay seems relatively spacious, but most engine repairs require jack stands at a minimum and removing the front end of the car (Audi's reknown "service position"),
b) got a lot of cash and don't care. It is a great looking and driving car after all when it's all working properly. 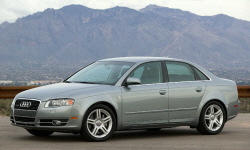 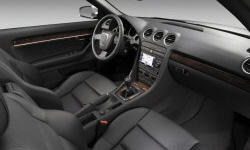