2011 Audi A5 / S5 Pros and Cons at TrueDelta: A great balance between performance and comfort by SpikeA4

I owned a 1998 A4 - logging 234,000 miles on it - prior to purchasing the S5. The A4 was fun to drive, extremely reliable, comfortable, and well built. Even with suspension upgrades (sport springs and shocks) early in its life, the body had no creaks or rattles. It looked nearly new when I sold it and is still going strong with its new owner.

The car is absolutely unique. If you don't want to be noticed, don't get this car.

I get that it is all wheel drive with a forward weight bias and heavy. It will never be as nimble as a Lotus Exige. But such cars are tiresome as a daily driver. The S5 provides incredible acceleration and cornering that is a blast on canyon roads. If I wanted a track car, I would have bought one. I bought a S5, an incredibly refined, extremely fast automobile that holds its own on the street with comfort and style second to none. The S5 is a perfect balance of performance and comfort in a street car.

There is nothing like the sound and feel of a high revving V8.

I knew what gas mileage the S5 got long before I stepped onto the dealer lot. Still, I get 24 mpg on a full highway run.

If you seek a car that stands out in a crowd, is faster than you will ever need, with the highest quality materials and design methods, look no further than the S5.

Nice review....i have a track prepped cayman and i am looking for a car to fill a niche exactly how you describe it. I rented one and hit the canyons outside of san fran and the sport turning and quattro made this big girl dance like i have never experienced.

I've had a series of autocross-prepped cars that I used as daily drivers when I was younger. A lot younger. But those experiences instilled a need to have a daily driver that was responsive and could handle being pushed on canyon drives. I'm glad you found it to be as much fun as I do.

HaHa...isnt it funny whats ok when your younger? Solid suspension and race seats has kept me away from driving the cayman on the street and lord knows my wife is motion sick in minutes driving with me. How has the ownership experience been - maintenance, reliability etc?

I turn 60 this year (which blows my mind) so my autocross cars were accordingly old: heavily modified '70 240Z and '70 Opel GT. Slow by today's standards, but back then they were a blast. Canyon roads with the wife on board. I might as well be driving a neighborhood ice cream truck.

As for my S5, I am extremely pleased with the reliability. I've got 86K on it now. Since I keep a car for at least 10 years and 200K miles, I change the oil every 5K. Oil useage is higher than other cars I have owned - it uses almost a quart between changes. I've just had to get used to that. There has been 2 factory elements that needed replacement. First, the sport diff seals had a tiny leak at only 1K miles. The warranty fix was quick and there has been no recurrence. The dealer mechanic said that there were a group of diffs with that problem. Second, I just had a fuel injector go bad at 85K - its replacement was covered under the extended warranty.

I've had the carbon cleaning done twice as a preventative measure. As for the struck-by-lightning problems, I've had a couple. My radiator got whacked by a giant bolt on the freeway, so I had to get it replaced (I had my mechanic install a metal mesh behind the grill to prevent a recurrance). Also, there was a recall for a reflash on the ECU - when the dealer did the reflash, it killed the box so they had to replace it (at no charge to me). One thing that is irritating, but I just deal with it, is having more dropouts on Sirius than other cars. Researching onlne, that seems to be a common weakness for Audis. It still looks great. The black paint is still flawless despite getting to live in the desert sun. The seat bolsters have none of the wrinkles and creases that form on other manufacturers sport leather seats. The interior looks new. There are no squeaks or rattles in the body or interior. Window and door seals are holding up well - there is no wind noise or water leaks.

I have the 6-speed manual. Because I do a lot of highway driving, I still have the original clutch (my A4 clutch lasted almost 100K miles). The trans synchros are holding up very well - it shifts like it did when new.

As for gas mileage, I average just over 19. On a weekend run to Palm Springs, I filled up just before getting on the highway, paced traffic (~75mph) ran the tank low and jumped off the freeway to fill up. I was really curious what a pure highway mileage number would be. I got 23.9mpg. 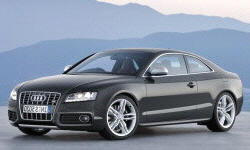 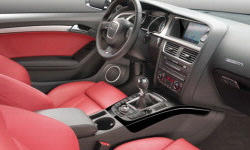