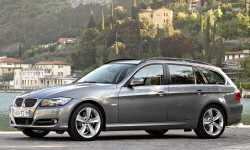 I am getting mixed signals about which octane is necessary for a 2011 328i xdrive automatic.Some say always use premium. The manual says prem highly recommended.
Will this car run well on the mid-range fuel (89) ?

I'd stick with premium gas, especially since these cars are so sensitive and repairs are so costly. With regular or mid-grade, the engine will not run as well or get the optimal gas mileage. If you payed for a BMW and its maintenance, you could probably afford premium 91 gas. If you open the gas tank door, it should say which gas to use or which is recommended. I had always stuck with the suggested gas type with my Jaguar and I never had any major engine problems that could have resulted from the wrong fuel type. I went through several water pumps though.

BMW engines are high performance engines that required high compression capable gas. The extra money we spent on premium gas is for its ability to handle the high compression requirement. Lower grade gas may ignite prematurely and resulted in 'knocking'.

With that said, my daughter accidently filled it with lower octane gas (85 octane) in my 2003 330i, and it ran fine without issue for a week. I switched back to premium gas soon after. IMHO, the fuel cost saving between premium and regular does not justify potential engine damage and repair cost.

Keep in mind that altitude affects the octane number for premium gas. A premium gas in Denver (mile high) is 91 Octane, and it is lower at San Francisco at sea level.

While your 2011 BMW 328i will run on regular (87 or 89 octane) you will notice decreased performance and gas mileage. The knock sensors in the engine computer will accomodate the reduced octane, but as one of the other posters noted, even the four cyclinder BMW engines are complex high compression high performance engines. If you put regular in it I would fill up with premium at the next opportunity.

I always use premium, but I don't put many miles on my car, so the price difference is not a big deal.

I've owned a string of BMW's going back to 1998, and including a 2011 328i. I have experimented numerous time with using a tank of mid grade and comparing to results to a tank of premium. There's no problem for the engine; today's computers are smart enough to adjust the timing so there is no pinging or any other symptom except that performance does fall off slightly. You'll only notice that if you look for it though so it's really no issue.

However, what I found interesting is that my gas mileage falls off noticeably with the mid grade fuel, and it falls off enough that the cost -per mile driven- on a tank of gas comes out the same or slightly higher on mid grade as it does on premium. That is: yes the mid grade costs less per gallon, but the number of miles per gallon received per gallon falls off enough that it's no cheaper to operate the car. After playing with it two or three times, I decided to just buy the premium gas. It doesn't cost me any more in the end, and I do get slightly better performance.

91 octane is the highest you can get in CA and San Francisco unless you go to a racetrack or something. 85 is the lowest octane you can get as far as I know mainly in Colorado or high altitude areas. Premium in Colorado is 91 like California. Never been to Denver or Colorado, just researched it.

In Quebec many companies (Ultramar and one local Esso station) are offering premium fuel at the price of mid range on Wednesday and Thursday, so I took the habit to fill on these days... Notice that in Quebec we pay gas much higher that in the USA...

Something else to consider, I noticed that much difference only with my 2011 328xi, my 1997 Z3 with 1.9liter 4 cylinders seem really happy with both although it is an high compression engine as well. Most likely the 1997 engine is less sophisticated than the 2011?

So to answer your question, I do not think that it may really harm but the car is much more fun to drive with premium...

When I am data logging the vehicle's ecu for tuning purposes my wife will use her grocery store fuel perks (Giant Eagle based out of Pittsburgh) and will see the engine being more knock sensitive. So I'll tune the car around the no Top Tier gasoline.

I've read every article I could find over the years on octane and what is necessary. All new(er) cars have knock sensors and the computer (ECU) will adjust to the octane to prevent pinging (pre-detonation) which prevents engine damage. The only time you'll have a problem is if a knock sensor goes bad and you'll both hear the pinging and feel the drop in performance. In that case, be SURE to run the highest octane possible until the sensor is replaced. However, when everything is working correctly, you won't damage your engine with lower octane, but you may also suffer a performance hit and lower fuel economy.

As a couple of the previous answers explain, you sometimes don't save money buying the less expensive gas, but I'd recommend using "Top Tier" fuel because the studies show the fuel system stays much cleaner. All the major brands (ex. Valero, Exxon, Shell, BP, etc.) are Top Tier and QT is the only convenience store brand in my area that is rated Top Tier.

We've tried Regular, Mid-grade, and Premium (10% ethonal) in my son's '04 325i (E46/M54) and settled on mid-grade. We didn't see any significant improvement in fuel economy or performance with premium, but we did see a drop-off when running regular. I'm sure every different series of engine performs a little differently.

A drop in tire pressures or a 25-35? F temperature swing will have more of an effect on fuel economy than does the grade of fuel these days.

I have a 2009 335xi, purchased new and have always used premium gas 91 octane. I have owned a number of turbo charged AWD cars (2002 WRX and 1990 Eclipse/ Eagle) and have always used premium, I have experimented with lower octane, typically regular in Canada is 87 and found performance decreased and the resulting lower gas mileage pretty much netted out the price differential. In Canada premium gas is the only gas that has NO Ethanol added, I believe BMW recommends gas with no ethanol. Ethanol in gas can cause premature wear out/ failure of some seals and plastic components in the fuel system. In Canada premium is a rip off as it commands a minimum 14% (costco) to 25% (shell and other typical retailers) price premium ....