2006 BMW 5-Series Pros and Cons at TrueDelta: The used BMW E60 5-Series; a Mixed Blessing if Ever There Was One. by Doobster6

This was a very low-miles example I bought used when it was already eleven model years old. The BMW dealership had sold it originally and maintained it meticulously so they decided to offer it directly for sale instead of wholesaling it. I jumped on the car (having only 71k miles) after my first test drive. For barely more than $10k I thought I had scored a HUGE deal since the car originally stickered for over $61k back in 2005!
But owning a used BMW that's well beyond its warranty is not a good deal in the long run. As 'Yourmechanic.com' reported, BMWs are far and away the most expensive used cars to maintain and repair out of the thirty 'normal' brands they studied over ten years (i.e., no Rolls, Bentley's, Ferraris, etc. made it into their analysis). In my first two years I averaged $1,800/year for repairs and maintenance and as my third year approached, I was staring at $2,500 more in 'preventive maintenance' that in my view, didn't seem to be preventing anything. My $1,800 experience matched the article within 1% of their own calculations so they confirmed what I already had grown suspicious of. This car was going to cost me a LOT of money (at least by my standards) to keep 'properly sorted' over the next several years.
Since I am long past my car-tinkering years (no longer a DIY'er), and because the car was depreciating $1,000 per year, I calculated the situation untenable; I was not going to soon be plowing more money the car than it would be worth. I'm not that much of a BMW enthusiast!!
And so I followed the implicit advice of the article, sold the Bimmer and bought a Lexus instead. Find my review of that car on this website to learn what I think of tht car, especially in comparison to my money-sucking used BMW! Uness you work on your own cars, OR have lots of idle cash to burn, there are today better alternatives than a used BMW!

The E60 body style had to grow on me. It was one of Chris Bangle's victims that pursued change for the sake of change instead of evolving a tried and true design theme. I didn't like the cats-eyes headlights nor the Bangle-bistle trunk. On a scale of 1 to 10, with 1 being vomit-worthy and 10 being lust-worthy, the car started off as a 4 and grew to be a 5.

The E60 interior fared better than its exterior but still exemplified Teutonic sterility and competence rather than opulate luxury. We spend 98% of our time inside the car looking at its interior appointments, and only 2% on the outside. Yet many people discount the importance of their interior environment, subordinating it to the opinions they want to cultivatre among their neighbors. For me the E60 was clearly an executive interior but one that mostly hewed to being 'all business'. But I at least far preferred looking at that than at its exterior. I found it a pleasant enough environment to spend time in. I would score it a 6.

My model was the 530xi. This inline 6-cylinder was the most powerful naturally aspirated, non-M I6 engine BMW ever exported to America. It's why I bought the car over the lesser 528 or 525 models. The power was always more than adequate and when caned, the engine became a roaring smile-producer, fully upholding BMW's then well deserved moniker of 'ultimate driving machine'. BMW imbued this engine with variable valve timng AND variable valve lift which produced a broad flat torque curve that seemed to provide multiple engines under the one hood. It works spectacularly. The ZF transmission, 'only' a 6-spd, was a marvel of shifting perfection. I had been a die-hard manual lover and only bought this particular car because I couldn't find one with a stick. But it performed flawlessly and altered my thinking about automatics. This turned out to be a very good thing because your options are 25 times greater if you include automatics on your used-car shopping list. The AWD system was also perfection. Always engaged, one never even noticed when it was working to pull you along a wet slippery road or through some snow. It rivals Audi's much heralded Quattro systems (which we also own) and absolutely trashes Infiniti's not-so-Intelligent AWD system that always needed to take 1 precious 1/2 second to decide if it should engage the front wheels; a second that inspired panic on a snowy uphill turn. So I have to give this car's powertrain a 10!

Fuel economy averaged 18.9 mpg in my day-to-day non-highway driving. That's a fair number for a solid AWD sedan of its proportions and weight. I once achieved 31.6 mpg on a 75 miles highway run, albeit owing to some judicious hyper-miling driving techniques. 'Normal' highway driving at 80 mph returned 25.6 mpg. Modern SUVs can achieve that today so I don't count fuel economy among the E60's selling points. I'd give it a 6 at best.

Ahhh.....the BMW's raison d'etres! The E60 was the last of the proper 5-series 'ultimate driving machines'. This car epitomized the magical alchemy of springs dampers and bushing sthat it seemed only BMW jnew how to combine to create a car that was a comfortable-enough cruiser when you wanted that, but would provide athletic competence on curvy roads. I drove all manner of used Mercedes, Volvos, Audis, Infinitis but needed only fifty feet of travel in the dealer's lot to KNOW that this car would be a terrific driver. Nothing else back then, and very few cars since, can compare. The 2011 BMW 5-series began the marques decline into anonymous chassis dynamics, done intentionally to appeal to a broader audience (aka, Buick owners). Sadly, BMW today still makes great cars, they just don't make very good BMWs anymore. For handling and chassis dynamics I have to give it a 10.

I always felt safe in this car. It conveyed that elusive feeling only BMW and Mercedes seemed to create that made you feel like you were driving a car machined out of a solid block of steel. And the brakes were also marvelous, at least for the relatively benign challenges I threw at them. Great, predictable and progressive pedal feel and sure-footedness when braking. Score another 10 here.

The E60 is no mid-70's Cadillac, that's for sure. Any car with its athleticism in the corners, and having only passive suspension technology holding it up (i.e., no magnetorehological shocks) is ging to exact some compromise on absorbing bumps and other road perturbations. The E60 was then the absolute best at balancing this compromise, and the ride smoothness scores at least an 8 here.

Its not Lexus LS quiet but it's certainly quiet enough. Being a sporty sedan, it let in just enough motor-music for an enthusiast to enjoy. Given the nature of these back then, BMW also struck an excellent compormise between audible entertainment and quiet solitude. Score an 8 here.

My car did not have either the sports seats nor the comfort seats, both of which I tried and found superior; significantly so. The 'base' seats in my car were not the best seats I've ever had in a car although in fairness, they did not punish my lower back as once did the seats in my Infiniti G35x. They were adequate; more an ally than a foe. They also lacked meaningful thigh or side bolsters and so were clearly the choice of Buick-minded buyers, and so did not invite spirited driving. I score thm a 6.

Excellent; no complaints here. BMW knows how to dsign an interior for drivers, and back then always provided a doorsill perfectly positioned, and at an appropriate distance away, for comfortably propping the left elbow while cruising along. Score this an 8.

Terrific! Six footers had no problem back there. This was then the biggest 5-series ever built and unlike my first 1995 E34 model, back-seaters had nothing to complain about unless they were really tall! Score another 8.

This was not then a prioroty for BMW. That said, I disagree with many detractors in finding their cup-holder design of this era the best that's ever been put into any car. Beyond those though, deliberate cubbies were merely par-for-the-course. Score this a 6.

Trunk size was competitive with its size class which means almost ample enough depending on the size, number and heometry of what you're putting back there. I wish my car had had the fold-0down rear seats, a MUST-HAVE option IMHO. Score another 6.

I wish these cars still provide gages for the important information an enthusiast wants to know about, like oil temp and oil pressure. But 5-series target customers actually don't care about that, at least not this model'stypical buyer. And I ABSOLUTELY HATED that the car no longer had a dipstick for checking the engine oil!!!! How much money could they possibly have saved by eliminating that?!? I don't mind also having the inside oil level display (that takes 1/2 minute to summon) but it should have accompanied the dipstick, not eliminated it. I also would prefer radio station buttons. Once again I wonder how many pennies are saved by liminating them while simultaneously rasing the occupants' irritation level? I did get used to having to always have them on the center display and so then using the rotary controller for that, but I still would have preferred conventional old buttons. BTW, the iDrive controller from back then is nowhere near the Chinese puzzle detractors have made it out to be. There's a short learning curve that an engaged driver will overcome in mere days, and that then opens the door to many other control options most cars wouldn't make available, like discrete climate control adjustments. Overall, I score a 7 here.

Unless you are a DIY'er, avoid the older BMWs, no matter how good a condition you might find one in. I found the absolute BEST possible car with low miles and an excellent pedigree of ownership and service, and it was still costing me $1,800+ each year to maintain and repair. As they say on the forums, BMWs are 'pay-tp-play' cars that I simply have grown tired of 'paying' for. There once was a time when only BMW could provide cars with magical suspensions and spirited engines, but their time has passed, and I think they know it too. LOTS of other cars today have caught up to BMW and now match their once elusive combination of sublime handling and comfort, and without the expensive appetite for care and feeding.
And the newer BMWs have conceded defeat and morphed into German Buicks. This has been great for BMWs annual sales, but not for enthusiasts. As I am fond of saying; BMW still builds great cars, they just don't build very good BMWs anymore.

More About the 5-Series 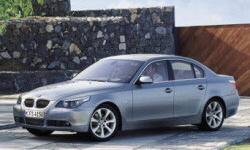 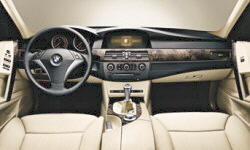