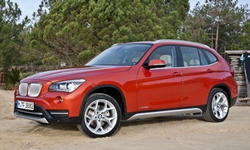 BMWs are some of the most expensive cars to maintain, so go with something else if you want reliability. Get a 2017 CX-5 or a CR-V if you want something faster. The CX-5 is more reliable, slower, but more luxurious. I'm not a fan of the X1 seats. They are some of the hardest seats I've ever sat in. BMW nickel and dimes you for every little option.

If the BMW you are looking at is CPO, then maybe keep it until the warranty is up. It will likely start having major problems at 75k miles.

The realible Honda's are starting to fade. I'd hold off any direct injectedHonda 4-cylinder because of fuel dilution of the motor oil until the root cause is identified.

Honda CR-V engine troubles have been signaled by owners who have complained of gas mixing with oil in 2017 and 2018 Honda CR-V turbo engines.

But the problem only happens if your driving pattern involves many short trips in very cold weather. If this does not apply to you, then I don't see much of a reason not to buy it. Honda is working on a fix to release in mid-November, probably for free. That guy who traded for a RAV4 will hopefully get his $7k reimbursed.

If you want some more power, a 2.5T CX-5 is projected to be released for the 2019 model year. The naturally aspirated 2.5 base engine is pretty slow, on par with the class of around 9 seconds 0-60.

FWIW, two of my neighbors have an X1. The 3 year old one sounds like metal in a blender when the engine is started. The other one is probably five years old and has blue smoke coming out of the exhaust, which means it is burning oil or the turbo is failing.

Even if the CR-V has this problem, its maintenance costs will be no match for BMW's.

I guess you missed this part of the above article, "While the problem may be more common in those circumstances, it also has been reported in warmer temperatures. In the NHTSA database, there are accounts from California, Kentucky, Oregon, Tennessee, and Virginia?as well as colder-weather states such as Maine, Minnesota, New York, and Wisconsin. And CR has heard from CR-V owners not just in Minnesota but also in Delaware, New Mexico, and even Texas."

Serbia temperatures range from 30-70?F and not a good environment for Honda 1.5t on short drives. Plus the repair rate on Truedelta for the CR-V has been higher than say a Chevy Equinox which also costs $7,000 less than the Honda. I wouldnt recommend the CR-V to anyone unless they knew what they were getting into with the engine.

Other article comment sections say the forums are reporting similar problem with the non-turbo 2 4l.

Thanks everyone.
I am not sure why the header in my message says Serbia--I am in San Jose, CA!

So in terms of small luxury SUVs, what would be your the recommendations? I'm looking for low maintenance costs and safety/reliability.
thanks!

The Lexus NX and Buick Envision are the most reliable compact luxury SUVs. Except for reliability, they don't really perform better than the competition in any one area, but they are at least decent to drive. Both of them are tuned for luxury and not sportiness like the BMW. Buick doesn't hold its value as well, so you may be able to get a good deal on one of those used. Not everyone likes the Buick badge, but that is an opinion.

When someone asks me what used luxury SUV they should buy, I always say the Mazda CX-5 Grand Touring is the best value. It really does feel like an entry-level luxury SUV in the GT trim. The only thing that might hold you back is the Mazda badge and the lack of power compared to the turbocharged competitors. Since it doesn't have a prestigious badge, the price is very low. Test drive a used 2017 CX-5 Grand Touring and see if it is right for you. I would totally get this over the Lexus and Buick. The CX-5 has had top-notch reliability scores every year since it debuted. You can get a Certified Pre-Owned CX-5 to get a 7 year/100k mile powertrain warranty.

The Lexus drops $11,000 in two years while the Buick holds it's value better only dropping $3K. This all according to cars dot com, new and used.

That doesn't explain the rate of depreciation, Norm. Find the actual percentage the value drops instead of comparing a few prices on cars.com. If you take into account the popular Buick incentives, of course that will seemingly decrease the depreciation. Without the incentives, comparing apples to apples, a 2.0T Envision would be at least $40k and can reach nearly $50k.

I just brought up depreciation, but the OP didn't seem concerned about it. It might be better to buy the car that depreciates more since they are buying used. The Buick might win there.

Wow, I didn't know the Mazda was that fast. Car and Driver got 7.8 seconds with FWD. The gas mileage is below average, though, probably from the insulation they added.

You can get residual values right from the bank where they are established and set or Edmund's has them too along with lease cash if any. The rate of depreciation is very much the same after 3-year mark on any mainstream vehicle. So you need to focus on purchase price and include incentives into the big picture of vehicle ownership because no one pays MSRP, so it is moot.

Your website averages MSRP and average listing price over 12-years.

"We determine this by sorting on the difference between the full price paid and the average listing price the past twelve model years spanning all trim levels."

A vehicles life cycle is 5-years between redesign and model freshening. That 12 month average doesn't factor in price reductions at the end of cycle and the end of each model year.

There are too many variables to know when calculating resale value in order to be accurate. Location also matters because in my area, the European brands and Lexus do not usually depreciate as much as domestic luxury brands. In Ohio, I understand why Buicks would be more sought after and thus have a higher resale value. Residual value is the price of your car after your lease is up if you decide to buy it and it affects your lease payment. Resale value is how much the car is worth when you plan to sell it. Resale value has different percentages from residual value.

Edmund's longterm CX-5 driven in California has an underlying theme that it is slow. It maybe faster than your Prius but it is still slow. "I got ready to pull back into traffic, traffic that was scooting along somewhere around 50 miles per hour. Although the CX-5 managed to get me up to flow-of-traffic speed, it didn't seem the least bit happy about it. The sluggish response to me laying into the gas was more than surprising ? it was disappointing. The CX-5 is fantastic in many respects. But getting up to highway speed quickly isn't one of them." "...several of us are already disappointed in the CX-5's somewhat toothless acceleration and general non-zoominess, we're all furiously plastering the accelerator to the floor in an attempt to coerce any life out of this powertrain. That's not going to help our fuel economy."
"The CX-5's non-turbocharged four-cylinder has to work hard to keep up with traffic, and it doesn't have much left when you pull out to pass on the highway. Adding that turbo engine would make the CX-5 'feel alive' in a way that it doesn't now." "push the CX-5 at all or try an aggressive lane change, the lack of power is very noticeable. The engine growls loudly, but the CX-5 does not move to match the sound. Also in terms of fuel economy, I was averaging just over 20 mpg, which falls short of the EPA ratings. Compared to the fuel economy you can get in the Honda CR-V, which feels larger and more powerful, the Mazda CX-5 doesn't compare."

My area has prices the same as L.A. for new vehicles., or ot much of a discount. That is why I don't purchase my cars locally but have them shipped in. Carvana has a similar approach and Carmax offers shipping to your local store. So the residuals and resale won't change much base on region as proven my comparing two different zip codes for the same vehicle on KBB.com or NADA, doesnt matter if it is Buick or Lexus. The only thing that influences prices is demand and sometimes auction prices.