2011 Buick Enclave Pros and Cons at TrueDelta: Lovely to look at, and fun to drive, but with some major issues. by Herstorygirl

A member in Louisiana, United States

I'll admit, one of the primary reasons why I chose this car (initially) was its appearance. The Buick Enclave is a truly beautiful crossover SUV and after six years of driving it, it still looks pretty awesome. The exterior paint quality is probably better than any car I've ever driven (this is my sixth or seventh car).

This model is nicely appointed with beautiful leather seats and boasts a high-end look to the dash console. The buttons/controls are very intuitive and are well-placed.

The 2011 Buick Enclave is, by far, the SMOOTHEST ride I've ever driven! I've owned 6 or 7 cars in my lifetime, and I've driven about twice that number, and nothing compares to this smooth, gentle ride. It's a FUN car to drive and the acceleration on this 6 cylinder model is amazing -- very powerful with a lot of spunk!

The BOSE speakers are to die for!!!! Let's just say: I'm all about that BASS and this car has some amazing sound!

My compalint is that some of the trim/body work seems to be kind of shoddy. I was driving on the interstate this afternoon and in a span of 30 minutes, a small panel of my car's exterior FELL OFF! This is the small, rectangular panel right behind the middle-row/second door, on the driver's side. Before this, there was NO indication that there was a problem there. The weather stripping around the windows and doors is also coming off, which is really annoying. The car has never been wrecked. The majority of the time, it is parked in a garage, not exposed to the elements. I don't go to cheap car washes and I have not had any damage to this area of the car. It appears that the glue, holding the panel on, simply "failed." And I have no idea where the panel is since I was driving for 30 minutes on the interstate. What on earth??? I have BABIED this car and it is in remarkable condition for a vehicle that's almost six years old with 140,000 miles! And NO, it's NOT to be expected with a car this age; I have previously owned a 10-year old Volvo with more than 200,000 miles, and two Hondas with equal or more age and mileage, and none of them had such issues.

ALL of the paint/finish on the buttons and controls on the dash console and navigational panel is chipping off! There are multiple patches of LIME GREEN plastic showing through and this issue started within the first year of ownership. :( These must be the cheapest made buttons/controls ever made for a car!

The fuel economy is abysmal and as far as I know, Buick STILL doesn't offer a hybrid option. The best mileage I've been able to get on long road trips with mostly highway driving is 22-23 mpg. City driving, however, stubbornly stays at 14-15 mpg, no matter what I do! :(

The headrests on the two front seats are a NIGHTMARE! I had to recline my driver's seat slightly because the headrest pushes my head and neck so far forward, it was causing me to have pain and spasms in my neck and shoulders! I don't know who signed of on this design, but they were clearly asleep that day! I've heard this issue has been addressed in newer models and (I think) there is a newer option for which you can swap out these awful headrests. I may look into that...

I will be taking my Enclave in soon to have an AWFUL rattling sound addressed for the 4th time since I bought the car (new). There is something seriously wrong with the front axle/struts/turning mechanism on tihis model car and I'm tired of hearing the familiar "death rattle" every time I make a sharp right or left turn. I'm kind of wishing I had taken this car back under local "Lemon Law" guidelines after the first time this sound started (when it was only a month old!). This is the MAIN reason why I will probably not be buying another Buick Enclave. As much as I love my car, I cannot handle this ridiculous problem any longer.

All in all, I'm not sorry I bought this car, but I doubt I will ever buy another Buick Enclave. For the most part, it has been very reliable and dependable. It's never left me stranded or caused serious risk to my safety. But I kind of think: if you're gonna pay upwards of $50,000 for a car, it shouldn't have "dollar store parts" or embarrassing noisy problems which never completely go away. That's too much money to pay for substandard quality.

GM quality has improved over the years but it still does not quite match what you will see from the best in the industry. They adopted six sigma philosophy back in the early 2000s so what you see today is reliable transportation that gets you around and will not strand you.

Having said that, only a few manufactuers today achieve what your old Volvo did. One in particular for the most part is Toyota/Lexus. Their cars still last 200,000 for the most part with minimal fuss. One way they do this is they are late adopters to the latest features. For example, while GM and other brands have Andriod and Apple interfaces on nearly all cars offered in 2016, Toyota is only now starting to offer that on the models that are being redesigned. So if you don't want the latest and greatest, Toyota is your best bet to go 200,000.

Your old brand, Volvo, is no longer owned by Ford and is now owned by a Chinese company called Geeley. Geeley is trying to keep Volvo management and is investing in it but no one knows how the quality is going to end up today in the new cars built. It is an open questionmark and is a risk for anyone buying their cars.

Nissan has not been the same since it started working with Renault. Their reliablity has gone downhill and is no better than GM anymore and in many cases is worse. Honda is hit and miss. If they do a transmission redesign you have to avoid the first year the car is bulit (and sometimes more). I owned two Hondas (an Acura TL and Honda Accord) with V6 engines and both suffered complete losses of the transmission at 60,000 and 30,000 respectively. Four cylinder Honda are very good - as good as Toyota - but six cylinders are hit and miss as they just changed the transmissions again and the cars are all very unreilable in the six cylinder configuraiton. They will fix it but the question is always when.

The Eurpoean cars are all good cars but again, they do suffer from problems which will not match your Volvo. Some BMW's burn oil. Some Mercedes have electical problems. It is a crap shoot with them.

Even carmakers like Subaru have known problems. A percentage of Subaru's burn oil. Consumer reports says about 10% of them do after less than 100,000 miles.

I do agree when you said the GM cars have some issues. I own a 2006 Saab 9-3 with 143,000 which was made by GM. It rattles - no doubt. However, the problems have been minor (lost the AC/heat fan for $300 this year, lost the alternator at 70,000 for $300, repaired a seat rip at 120,000 for $200). However, at the discount I got the car compared to buying the eqivalent Lexus I am satisfied with dealing with these small issues. I owned an Enclave as well but did not need a car that large anymore so after only 5 years and about 60,000 I got rid of it for about 50% what I paid for it. That was low mileage, but I did not have any of the issues you mentioned (the car was too young).

I proably will look around the market again when the time comes but suspect I will look at GM, Toyota, and Subaru (we also own a 2013 Subaru Legacy with only 41,000 on it). Those three brands I generally trust to get me around and last 200,000.

We purchased a 2012 AWD Enclave "Leather Edition" in May 2017; it had around 53,000 miles at the time. When we test drove it the onboard info system showed the MPG to be 18.8. I figured that maybe it's low because it had been doing short trips around the dealership parking lot and/or maybe some brutal test drives. I thought with some normal driving it would easily jump up into the 20's. WRONG. We put about 20 miles/day with approx six miles of the round trip at 55 MPH, the rest is stop/start city, drop kids off at school type driving. We rarely use the remote start option except for on the frostiest or snowiest days. Weeks that we've used the remote start a handful of times we'll average around 14 MPG; weeks without using remote start we'll get mid 15 MPG. On extended (200 + miles) highway trips we're lucky to get 21 MPG using the cruise control set at 70 MPH. If I had known the mileage was going to be this abysmal, I'd have purchased a higher mileage 3/4 ton truck for what we paid for the Enclave.

As noted by the original poster, the headrests are awfull. Other dislikes include unuseable cup holders in the door trim panels, unless you only drink from 12 oz. cans; the middle seats do not recline far enough for the kids to be comfortable (probably a safety mandated design) and those seat bottoms are too low/close to the floor which makes hip and knee angles uncomfortable for a long trip.


We bought the Enclave to replace our '98 Pontiac Transport Ext. that had a little over 205,000 miles on it. In my opinion, the Transport was much more "user friendly" vehicle. The only thing the Enclave has over the Transport is the quiet and smooth ride. Had the Transport not been sooooo rusty (where'd my rocker panels go?) I'd have stuck money into it to keep it on the road. Michigan's salty winter roads really take their toll on vehicles.

Our buyer's remorse is lessening the longer we own it, we love the quiet, smooth ride and the sure-footedness of the AWD and in the looks department it really is appealing to the eye. However, I really feel the shortcomings outweigh the glam factor. I like the vehicle, I just feel that for the money we spent, we could have found something more likeable.

Great comment--you probably have enough here to post your own review.

More About the Enclave 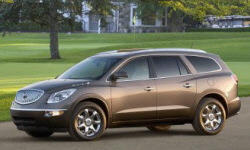 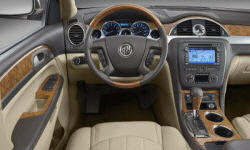