How comfortable on long drives? 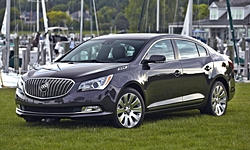 I currently own a 2004 Lincoln Town Car. i bough the car specifically for the smooth ride and comfortable seats. The driver and passenger seats have individually adjustable lumbar supports and they are simply wonderful. I am considering a late model LaCrosse or Impala or Taurus. I put a smooth, comfortable ride above handling and would like to get owner impressions.

We swapped a 2013 Buick Verano (small sedan) for a 2014 LaCrosse about 5 months ago and are extremely happy with the ride & comfort. The Verano was quite nice, but the LaCrosse is superb. Really quiet and smooth. The newest LaCrosse has active noise cancellation as well, so ought to be even more quiet.

Ours is a top-of-the-line version with the heated & ventilated seats among the many features. I think all LaCross have adjustable lumbar support, though, at least on the driver seat.

I have a 2011 Buick LaCrosse that is extremely quiet and very comfortable and smooth riding. It does have lumbar support. Passengers who have driven with me comment on the smooth and quiet ride as well as the wonderful Harmon Karden sound system.

I have a '13 base model, and it's fantastic on long drives. I bought it specifically for the comfort and quiet, and haven't been disappointed. The base model has lumbar support on the driver's side only. My parents liked mine so much, they bought a '14 a few months later. Mine has the eAssist mild hybrid system, and I average 31 mpg in mixed driving. The drawback is that the hybrid batteries reduce what was already somewhat limited trunk space. Even the V6 models will have a much smaller trunk than the Town Car.

I have owned a 2014 Buick LaCrosse Premium II ftor three years. I bought it as a retirement vacation car and it has not disappointed. However, a few notes:

The seats are very comfortable providing great support while not being hard or stiff. But, I did notice that the non-ventilated seats in the base models were more cushy than the stiffer ventilated seats with the perforated leather. The lower trims also do not have the same power adjustable lumbar support on the passenger seat as on the driver side. The bladder in the lumbar support squeaked since the day I bought the car every time I moved, so after 2 years of annoying noise I had it repaired/replaced under warranty. It is now silent. The buzzy alert seats that are only available on Buick and Cadillac are great. I prefer them to a chime and I have gotten to depend on them for backing up, lane departure and cross traffic. They work great. When I drive a car without them, I miss them.

The backup camera is fuzzy on my car. It's useable, but not as clear as other cars I am familiar with.

As would be expected in a Buick, the ride is extremely smooth and comfortable. But, if ride is more important than handling avoid the 20 inch wheels. They tend to crash over road imperfections and are noisier than the 18 or even 19 inch wheels. The 20 inch wheels do come standard with a hyperstrut front suspension with continuous damping that allows you to select between sport and touring settings. This adds to the handling prowess but the base suspension with the smaller wheels is still quieter.

The trunk on the 2014-2016 LaCrosse is small. Much smaller than your Lincoln or a Taurus, and even smaller than an Impala. In fact, you can get larger trunks on smaller mid sized cars. The Verano actually has a larger trunk. But, the back seats do fold down 60/40 so that compensates somewhat.

I hate Intellilink. I have read repeatedly that it is one of the most intuitive systems available, but for me it has been infuriating. Very slow to respond. Poor voice recognition. There is no detour function in the Nav. I would skip the Nav for the GPS in my smartphone, which works much better. Or, just use OnStar. Paying for OnStar for years is cheaper than the Nav system. Intellilink would now be a deal breaker for me.

I was also disappointed on the day I bought the car that it did not have a power tilt steering column. I had test drove an Impala and a XTS and both had a power tilt. I signed the papers and was on my way out of the dealership before I realized it was missing....too late to do anything about it. I miss it, but I have lived with it.

This website has not accumulated enough LaCrosse owners to offer informtion about reliability. I find this disappointing. I don't know if the car is that rare or if LaCrosse owners are not interested in participating. But, considering this car has been manufactured for many years now, you don't see many on the road. I do feel like I am in an exclusive club.

I share much of roadrunner1's opinion of the Intellilink system. Oddly, the version in my Verano was less frustrating, but the Verano had more buttons and relied less on the display for routine functions.

I find the trunk plenty large, but the trunk opening is tight so I sometimes find I can't get an item in, even though there would be room enough once it was inside.

Around my area (Ocala, FL) there are more than a few LaCrosse on the road, but LaCrosse owners don't seem to participate much online. The various car foums have few LaCrosse comments and the LaCrosse Forum is dead.

I have had a 2013 base e-assist Lacrosse since Jan 2014. It is very quiet in the front seats (I always drive) as the front side windows and windshield have laminated sound-deadening glass. I imagine there would be a bit more noise getting to the back seats since the rear side glass in not laminated. The ride is very comfortable but not cushy like 'your father's Buicks'. I have the 17 inch wheels. I have read car reviews that indicate when the car has larger diameter wheels, the ride is more harsh. The driver seat does have electric lumbar support in more directions than I've ever had in any previous car, but guess what - I've always needed the lumbar support to be active in the previous cars, but with the Lacrosse, I find the seat more comfortable with the lumbar totally retracted, not in use. The seat itself gives me proper lumber support and it gives me good thigh support. I have cloth seats, not leather. I've taken a look at the new 2017 Lacrosse and I am not impressed. In my opinion they have ruined the interior, it's not as nice as mine. Also the new car has the electronic shifter (like a joystick) and the reviews I have read are not impressed with it. Also my e-assist 4 cylinder gets great fuel economy and has plenty of power (it's not a sports sedan) - only the 6 cylinder is available now.

My Mom has a 2011 LaCrosse 2.4l. Being in her mid-70's and has made many 7 hours trips and has never complained about being uncomfortable.

The acoustic laminate front glass helps along with Active Noise Control, both of which she doesn't have as this generation was just two years old. But is nice otherwise.