2014 Buick Verano Pros and Cons at TrueDelta: All in all I still love it. by Unclefinch1

I am a ride share driver (uber and lyft) as a side job which I enjoy immensly, so suffice to say I'm in my car most of the time. I'm familiar with every control and material on every surface in my car. The interior ismostly well thought out. With exceptions including leg room for the rear and front door entry. Although the design of the interior is very appealing to the eye.

I'm shocked at the ability this engine has to move this heavy (nearly two ton) car. It's a 4 cylinder car that weighs just over 3,600 pounds empty. However the engine is still quite peppy and at cruising speed it's very quiet. Although around 2,000 rpm at 70 mph it still doesn't have that 4 cylinder drone of the average econobox.

This is really my favorite part! I've owned 24 cars before this. This is the first one with an ipod dock, Pandora connectivit, a back up camera, and a touch screen! It also has Bluetooth which has made my trips so much easier! No more having to take my hands off the wheel to see who's calling; it pops up on the radio! And I just press a button mounted on my steering wheel to call out a command. Like "text such and such, blank" and it does it! Or I just ask it to dial a number, call one of my contacts, and other things that I forget it can do! Mine doesn't have the navigation, however it does have the onstar navigation. I have definitely gotten my use out of that.

Every night I hear the Buick slogan. You have no idea how many customers get in the car and say"THAT'S not a buick!" Yes it is. Trust me. I bought it. And no, I'm not old. I'm 26. I'm far from old. Mind you, it isONLYold people who claim old people drive buicks. It's the 50 and up crowd who claim they're "old lady cars" without knowing how many youngsters actually drive them. They're not specifically for old people; they're for successful people. People who have made good financial decisions but don't care to flaunt it. People who enjoy comfort and luxury but don't enjoy the flashiness and pretentiousness of a Cadillac, Mercedes, infiniti, or the like.

I'm 6'3. With the seat all the way back I can't reach the pedals. I really don't need to say more.

If you're tall, prepare for cramping if you have anyone needing to sit behind you. I cannot explain the lack of room here. With my seat in my long range riding position (as far back as I can go with my feet still reaching the pedals) there is 1 and a half inches between the edge of the back seat and the kneeboard on the back of the drivers seat. There is no human capable of putting their leg behind that.

It used to be quiet.used to.But it seems as if that was just a trick from the tires. By no means has it gotten unbearably loud, but it's louder than it was. rattles and taps litter the once silent ride. It's not a problem if you have the radio even on the lowest still audible setting. But still. If you have the radio off, prepare to hear sounds you never thought you would.

Speaking of rattles, let's get into this. I don't know WHAT they made these panels out of, but do not get the black and grey interior. The black market panels will turn white after you touch them. It is an EXTREME annoyance to someone who is a clean freak like me. The drivers side door panel has already been replaced once. It decided to come up with the window one day. The warranty replaced it ($400 part apparently) so it was no big deal.

I have had nothing but problems out of the brakes since day one. Yes, they stop the car just fine. But they were warped! and they squeak! And the dealership said they would "keep and eye on it" but would not change them. It's a defect but they don't seem to care.

The trunk is massive for a car of this size. But also useless. You can't fit anything throgh the trunk lid. Or the backseat pass through. It's great for lots of small items. And Buick, stop using the luggage crunching metal hinges! Use the gas hinges that stay out of the way!

All of this being said, I still love the car. In less than a year I've put 42,000 miles on it with only one minor issue (the door panel separating because of bad glue) and the rest of the issues stem from me being picky. It really is a good car and has been reliable when it comes to getting me and my customers where we need to go safely.

We loved out 2013 Buick Verano Premium 2.0T too. It was the quietest car I've ever owned out the 20+ cars. The excellent materials and fit & finish along with almost 40 mpg on the highway is icing on the cake. 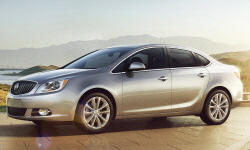 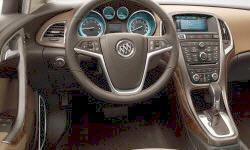