2017 Chevrolet Camaro Pros and Cons at TrueDelta: Redneck Racecar? Not Any More! by noodlenoggin

I travel for work, and every week I have some sort of rental car or another. This week it's a 2017 Camaro SS with 1700 miles on it. I've also previously rented the V6 Camaro and liked it, so I couldn't pass up the opportunity to grab one with the PROPER motor in it.

This is it. This is the highest performance car I have ever driven. For a week, I get to rent an Infraction-Red Camaro SS in the San Francisco Bay area, with the 6.2-liter V8 that adds 455hp to the world. Even with the automatic transmission...even with the V4/V8 cylinder cutoff doohickey...this car is fast. Like...faaaassssst. Like, no matter when or where, the right pedal unleashes sonic fury and launches you with ludicrous speed. I've driven fast cars before. Mustang GT back in the day when it made 236hp. BMW 540i with performance and handling packages. Doesn't matter. This year's Camaro SS is an order of magnitude faster than anything I've ever experienced. Yesterday on the freeway, there was a Maserati that was being hot-shoed around, and my instinct was "don't mess with this guy...you only have a Camaro." But after reading up...the Camaro SS is the equal of that Maserati, as well as pretty much everything else on the road. I'm talking about power in the realm of winning any stoplight drag that I'd care to initiate, up to the level of the Tesla P85D with "Insane" mode...that's one of the few cars I can think of that would beat this Camaro.

Did I go on for a little bit back there that the powertrain made this Camaro fast? Well, it doesn't even come close to how well the Camaro SS handles. GM has made a muscle car that offers handling on par with anything in the world. Yes, I said that. A Camaro with the 1LE handling package can turn laps faster than a Porsche 911 Turbo S and a Nissan GT-R. It can generate more lateral G's than either of those cars as well -- 1.19G in one magazine's test. The more "tame" SS has been tested at a solid 1.0G. In other words, this is a car that I will never reach the limits of -- not on the street at least. This is a car that will follow Any. Other. Car. through any set of twisties, anywhere. During tonight's jog through a couple of canyon roads I followed a guy in a WRX who thought he was something hot...and had to brake to avoid rear-ending him because the Camaro could corner much (MUCH) faster than his Subie -- and the on-board G-meter (because of COURSE the SS would have that!) never passed 0.50G. Let that sink in, like it did for me. Fast run up a canyon...enough to cause other boy-racers to back off...and it was only HALF of this car's capability. It's sobering, how well this car handles.

Driving position and visibility...gosh I wish those were different entries, because I'm going to have some things to say in the "Cons" section about this as well. Driving position, though...is good. The driver's seat is comfortable and supportive, and doesn't let you slide around during cornering. The dash is super legible, the steering wheel (with flat bottom!) feels good and is adjustable to where you need it. All the center controls are reachable. I feel that the Camaro gives you the tools to set yourself up to be able to handle the performance that it offers.

Surprisingly, this 455hp car, with a 6.2L V8 -- that's 378 cubic inches -- gets decent gas mileage. It averages just over 20mpg, for which I credit the cylinder shutoff feature. So far it's been pretty common to look at the dash when I'm just beetling across town and see that it's in V4 mode, and getting 40 or 50mpg, as long as I'm keeping my right loafer rather light.

Didn't I say I was going to revisit this entry? This car is tough to see out of. The stylish, short windows make it feel like I'm driving while looking through a mail-slot. The husky rear fenders fill a quarter of the outside mirrors, and the rear window looks like a hyphen in the inside mirror.

The problem isn't so much the room available in the front seat -- once you're settled, it's fine. It's getting in and out. This car sits low, and has short doors. Getting in takes a concerted effort to not bop your head on the doorframe. Getting out sometimes takes putting your hand on the ground and falling out, then jumping to your feet like "I meant to do that!" Come to think of it, there have been a couple of times that a large-ish dip in the road has made my head actually hit the ceiling. On the other hand, this particular car has the sunroof, which reduces headroom. Still, I'm only 5'10", and I can't wear a hat in the Camaro.

There isn't any. Just think of it as a package shelf with seatbelts.

There it is...the "Camaro Image." Years of Z-28's and IROC's have completely set the expectation (and not totally inaccurately, either) that Camaro's are driven by mullet-sporting, trucker-hat wearing, Lynyrd Skynyrd-rocking rednecks. Doesn't matter that Chevy now offers a machine that can out-corner a Ferrari 458 and out-lap...well, pretty much anything. It's still a redneck racecar.

This car is a mixture. It offers performance that's the equal of almost any car on the planet. It's so competent that it will make a so-so driver look good, and make a good driver look great. Of course this is at the expense of ridiculously bad visibility, tiny trunk and tinier back seat, ungainly ingress/egress, and the constant image of a loud-mouthed Coors drinker.

Still, I would buy one of these as a toy, if I could. The amount of fun I'm having with this car outweighs the negatives, like a horse outweighs a bulldog.

More About the Camaro 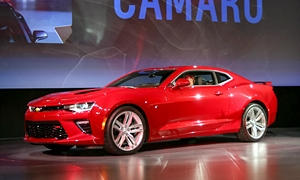 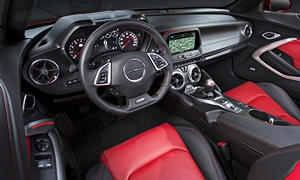