A member in Texas, United States

There is somewhat a long story behind the Chevrolet Colorado truck purchase.
I have only bought Honda and Nissan vehicles for over twenty years, due to personal experience with poor reliability of both Ford and GM products. My last two Buicks and one Ford truck had major transmission or other failures at or before the 50,000 mile mark.
I have always properly maintained my vehicles and do not abuse them. Such failures should not have occurred. Poor quality and design has to be the reason behind the failures.
I did some research into the most reliable vehicles back then and bought my first Honda.
I have not had any such failures while owning either Nissan or Honda Vehicles.
One of the Hondas I bought was a 2009Ridgeline. It fit that niche of being a great urban pickup while providing some unique features. It would also tow my small RV trailer with its 5000pound towing capacity, but it would drink the gas doing it. Another problemwith the Ridgeline was the low MPG even when not towing a trailer.
I started to look around for a replacement. Nothing was what I was looking for. I was resolved to wait until the 2017 Ridgeline details were released. When the specs were released I saw that the towing capacity was the same but they improved the MPG. That was a good thing, but I bought a new trailer that weighs in right at the 5,000
pounds. The 2009 Ridgeline would struggle to tow it at highway speeds. Though the 2017 Ridgeline had up the MPG, I could expect the towing ability to be about the same. I was really hoping that Honda would release a model with a diesel powerplant in 2017. They did not, but instead they pretty much used the Pilot drivetrain to improve the fuel economy of the Ridgeline.
I started my search for a replacement. I did not want full size pickup or SUV. I wanted something with great towing capacity and good fuel economy when I'm not dragging a trailer. Diesel powered vehicles seem to fit the requirements.
The only vehicle that seemed to fit what I wanted was the Chevrolet Colorado with the four cylinder diesel powerplant. The specs put it as having a 7,700 pound towing capacity with great fuel economy when not towing. I could find only one in stock in the Houston area. The diesel Colorado is new for 2016.
To shorten a long story, I bought it after a test drive and enjoyed the 25 plus MPG while running around the Houston area.
Yesterday my wife and I returned from a few days relaxation, lakeside in our RV trailer. The Colorado towed the 22 foot, 5,000 pound trailer on the 200 mile round trip while maintaining at 16 MPG average. That was the average MPG of my Ridgeline while driving in traffic in Houston without a trailer in tow.
I normally tow my trailer at 55 to 60 MPH. I would set the cruise control and the Colorado would keep the speed even on steep inclines. The truck also has some great towing features, such as exhaust braking, adjustable trailer braking and downhill grade control.
Other than missing the trunk and double acting tailgate that I had on the Honda, I really like the Colorado. Reliability is another question altogether. The clamp problem speaks of poor quality control. I hope that is not the case. The engine has proven itself in Europe and I have high hopes of reliability here in the U.S.A.

Amazing story and wise choice as the Ridgeline tow rating is probably set too high and would over heat.

More About the Colorado 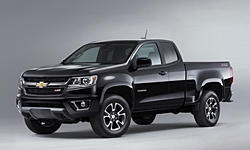 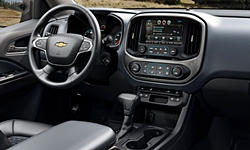