If you have to drive three kids (two are five and one is eight) for eight hours, this is the car to take!

I bought this vehicle to be able to transport my grandchildren back and forth between New Jersey and Ohio. I have the 2LT version with four captains chairs and really enjoy the convienence of not having to move a middle row seat to allow one of them to get into the "way back". Having three kids jammed together in a middle seat for an 8 hour drive is courting disaster--that's why I needed that third seat. Everyone has plenty of space. Normally I find any drive over 4 hours a bit uncomfortable but the seat and driver's position was very relaxing and comfortable. This particular vehicle has the most room for storage behind the third seat than any in its class. It is only beat by minivans and they just aren't my kind of vehicle.

My previous daily driver was a Subaru Crosstrek. The wheelbase of the Traverse is much longer and it has a much smoother ride--a few extra pounds no doubt helps keep it settled as well. One thing I appreciate is the height of the vehicle. Getting into the Crosstrek I would have to duck to avoid hitting my head. I find it much easier getting into the Traverse.

I have mixed emotions about the audio system. The Bose sound quality is outstanding and my phone links up almost immediately via Bluetooth. Voice commands are available shortly after the linking, a big change from my Subaru that seemed to take 5 minutes or more to finally initialize the voice command capability. One surprise was while my Samsung S9 is linked to the audio system and works for calls and texts, when I used Goggle maps for navigation it becomes totally mute. Not sure if the phone or the car is the problem. My fix, if I need the step-by-step directions, is to turn the phone's Bluetooth off then it works just fine.

The powertrain readily gets the vehicle up to speed, even when loaded with people and stuff. Shifting is smooth and barely noticeable--both a tribute to the transmission and the sound insulation. I thought coming from a CVT I would be annoyed by the shifting but it hasn't been a problem whatsoever. One nice feature is the starting battery is located just forward the right middle row seat in a compartment in the floor. Keeps the battery clean and well protected. If you replace the battery it would be helpful to have a device to lift the battery unless you have exceptionally strong and long fingers.

I've owned several Chevys over the years. I have confidence in the brand.

I'd love to have better mileage; but, I also want cargo capacity and comfort. That's the tradeoff. The newer Traverse has a 9-speed transmission that no doubt helps it get a few more miles per gallon but it also has auto stop/start (which I'm not fond of). Mileage on the trip to and from New Jersey was right at 24 MPG--when I remember my last Chevy (IROC-Z28 with L-98 engine) I realize that was the same mileage I got from a car that had little utility.

I don't have the V92 tow package so my tow capability is only 2000 pounds. Didn't need that boat anyway. If you want to tow, you must have the factory installed V92 package--look for it on the vehicle's build sheet (usually stuck in the glovebox).

I don't expect this vehicle to hold its value like some brands.

I bought the vehicle used with Goodyear Fortura tires. They were terrible, provided a lot of road noise and vibration. Replaced with Firestone Destination LE2--a totally different vehicle. The Goodyears still had good tread but they were severely weather cracked on the sidewall as well as the tread.

Cup holders are limited in the second row (I don't have the center console). Only holders are in either door in the lower portion.

When I looked for this car I evaluated it against the Honda Pilot, Toyota Highlander, Ford Explorer, and GMC Acadia. I liked some of the features in the Acadia but the Traverse was available and is basically the same vehicle (powertrain).

In all cases the Travers won by better price and cargo capability. The audio system is far easier than the Honda's to operate as well.

We have the similar Acafia Limited which was the last of the big version on lease. It is my wife's daily driver and is a very big vehicle to park and drive as it is almost 5,000 lbs.

We can see 26 mpg at 65 mph on long drives fully loaded which is very good. Ours is a Limited or SLT but has Denali details minus grill and vent leather seats. The entry and seating position is huge. You sort of get in and close the door and then keep moving to the center of the seat. The heads up display is nice so you don't have to look at the instrument panel. Outward visibility is good but the height with the antenna will not allow it to fit into our older garage.

The NAV and bluetooth work great with our Samsung S7 phones. The twin AC with one in the rear really cool the car down quickly which great for the dogs on hot days as their is a ceiling vent above each seating position.

At almost 40,000 miles we have not had a problem with the Acadia and recently used up the free oil/tire rotations so cost is very low. We have an extra set of wheels with tires a d TPMS I picked up for $500 so we wkbt need to spend $1,100.00 on replacement tires at lease return.

The over 25% off MSRP makes this the best bang for the buck and the largest crossover you can buy!

More About the Traverse 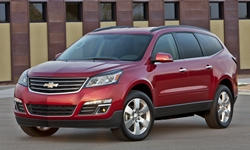 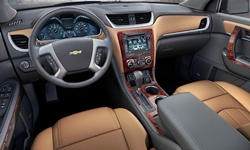