We just traded in our '08 Uplander, with 108,000 miles on it, because it is falling apart. We've spent $3,000 in the past year on repairs -- shocks, bearing, water pump, steering rack, more. And the interior is just broken -- cupholder, trim pieces, weatherstrips, they just break or fall off.

This van has always been just a bit too small for our family of six. A week's groceries don't fit behind the back row. A week's vacation packs this van to the ceiling. Nobody has enough legroom. Everyone's back hurts on long trips.

This '08 van has less features than the 1998 van we traded for it. It's a 1993 Venture with a tarted up body. In 2008, it has no flip and fold seats, no armrests or cupholders for the center row, no separate temp for the back, no storage wells in the floor, and the seats aren't even *easy* to remove.

This van handles like an overweight pig. It pushes in corners. It bounces on bumps. It leans in curves. It's not enjoyable. It truly is a 1993 Venture that's been raised several inches to resemble an SUV.

The dashboard is hard, dog-dish-like plastic. The carpet stains easily. The interior bits fall off and pull apart. The rear vents come out of the ceiling. It's slapped together. You can tell this was the last minivan GM was going to build, and that they didn't care when building it.

We bought this van because the price was right, and our old van was dead. We got a good deal, at the right time, but this van just doesn't stand the test of long-term ownership.

More About the Uplander 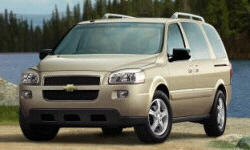 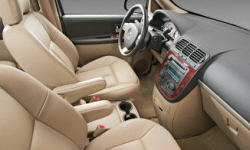