The Volt is an ambitious car, and my experiences with it have been completely positive, with the exception of some minor complaints about the interior layout and rear visibility.

First and foremost, I'm hooked on electric; the torque, the silence, the instant throttle response, and convenience of "fueling up" at home. The Volt has proven very relialbe; in two and a half years it's always started right up and served as my primary vehicle with zero drama. I had one instance where battery coolent had to be topped off, which was easily remedied under warranty, but at no point did this render the car undrivable.

The car accelerates, rides handles far better than I was expecting given its "green" categorization. It's legitmately fun to drive and is perfect for my congested, traffic-laden commute.

Gripes? Rear visibility is atrocious which makes merges and lane changes a leap of faith. The center stack buttons are poorly laid out, and the fact that they're not actual buttons is a dumb gimmick.

But in the grand scheme of things, these complaints are minor to how much of a pleasure the car is to drive, and how throughly GM's engineers nailed the drivetrain. The switchover from battery to gas is smooth, and I regularly take road trips with zero drama. I really feel the powertrain is the best of both worlds until battery prices come down.

All in all, I'm a huge fan of this car, and its replacement will likely be another Volt when the time comes.

I agree completely, plus I'll add: This car saved my wife & I & 2 grandsons--sacrificing itself just as it's supposed to do. I was completely stopped in the roadway waiting for oncoming traffic before making a lefthand turn. We we rear-ended by a Chevy Avalanche doing 55-60 who made no effort to swerve or even brake--I full-speed drive through. The car folded up from behind, the front seat hinges breaking off from the force. Even the dash modules were knocked loose from the interior. But thankfully, none of us were hurt badly. And all four doors still opened to let us out. From the front doors forward there wasn't a scratch. I had some neck issues for 6-8 months & all of us were of course carted to hospital to be checked out. (One ambulance, 4 people, so we were billed $500+ X 4!). Like others, the bizarre dash layout in this car drove me nuts & since the new ones weren't out yet I elected to get a Cadillac to replace it. But someday, I will again have a Volt!

More About the Volt 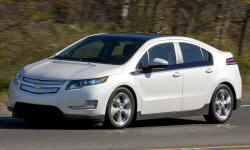 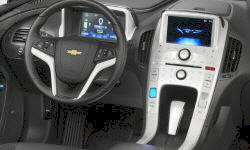