2007 Chrysler Pacifica Pros and Cons at TrueDelta: A exceptionally smooth and extraordinarily spacious crossover by CarLuva

If I could describe this car in a single word, that word would be "smooth". Everything about how this car rides and drives is smooth.

The 4.0L V6 provides plenty of power to move this heavy car, and the 6-speed automatic is probably the most responsive automatic transmission in any car I have ever driven. Somehow, it seems to always be in just the right gear. On top of that, the gearshifts are silky smooth, even under hard acceleration.

The rear seats in this car (the two-row version) really are designed for adults; legroom is incomparable. Be aware that in the three-row version, the second row seats are moved forward to accomodate the third row, so there is less second row legroom.

Every person who has ever loaded anything into the back of my Pacifica has commented on how huge it is. You can really fit anything in there. Furthermore, folding down the rear seats is done quickly and easily with a single handle, providing even more space for bulky items.

For the most part, this car is very reliable. The one major problem is with the motor mounts, which pretty much break and have to be replaced every 40,000 miles. They are costly, but not exorbitantly so, and this one issue certainly shouldn't be enough for most people to rule out this vehicle. When they do need to be replaced, you absolutely must ensure that they are replaced with OEM parts—the aftermarket parts are commonly made of solid rubber (instead of being gel-filled), and they will not absorb engine vibrations the way they are supposed to, resulting in absolutely insufferable vibrations and rattling noises in this otherwise wonderfully smooth and quiet car.

For a premium crossover manufactured in the late 2000s, the interior design is pretty bland (aside from a classy analog clock just to the right of the steering wheel), and the dashboard controls in particular look quite dated. On the other hand, the driver's instrument cluster is very nicely laid-out, and the extremely spacious and comfortable seats, along with the smooth ride, more than make up for the lack of visual appeal.

The fact that this is actually a very big crossover trying to look smaller make the proportions a bit awkward from some angles. Some people even think it looks like a minivan instead of a crossover (I disagree). All in all, it's not beautiful, but it's not ugly either.

For the most part, this car does quite well with storage compartments, but the one place where it fails is with cupholders. The front seat cupholders are big enough and relatively conveniently placed; unfortunately, they have no means of gripping smaller containers, so any smaller drink that is not inherently stable (such as a typical 20-ounce bottle of water or soda) will constantly fall over. Furthermore, the only cupholders in the rear seat are in the armrest that folds down from the center seatback, so when the center seat is occupied (such as with a child seat), rear-seat passengers are left with absolutely no place to put their drinks.

In my area (northern Virginia), the Chrysler dealers seem inconsistent. The dealership where I have my car serviced is excellent, and I've never had a problem with anyone there. The only problem is, it's half an hour away from me; there's a dealership just a couple of miles up the road from me, but I absolutely refuse to go there after an encounter with a sales manager who was blatantly lying to me virtually every time he opened his mouth. 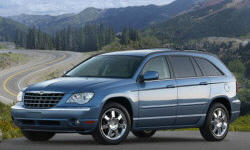 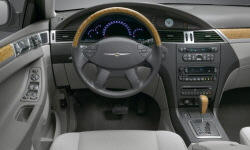