Quad cab rear drive SLT with Hemi. Used purely as a service truck in the Electrical business. 1000+ lb load with constant stops in often heavy traffic. Have personally maintained it since new and I think that helps. Mobil 1 since new. Front wheel bearings noisy at 110k. so replaced. Alternator bearings had slight noise so I replaced as a precaution. A few other tiny issues and that's it in over 10 years. People still think its a few years old. Its held up well.

Hemi is strong engine but not as much torque as some at low RPM. Still plenty though. Smooth and likes to rev. Great sound stock. Hemi tick doesn't bother me like it does some.

Handling sold me on this truck. Huge improvement over older trucks. Very confidence inspiring. Recent change to AT tires has hurt this some though. 20 inch tires handle great but wear faster. I changed to 17s and was happy with the compromise.

Most reliable vehicle I've ever owned and I've owned them all. Toyota, Honda, etc. None have been any better. Truck is used as a work truck with heavy loads and short trips. Only a few minor issues in over 10 years. Never broken down on side of the road. Just solid.

Solid build quality. I work on this vehicle myself and you can't appreciate the build quality until you do. Easy to work on and quality on the little things, like fasteners and electrical connectors is top notch. Interior looks almost new 10 years later despite being a work truck.

Nice and well laid out. Has buttons and knobs instead of all the complicated screens and menus on newer vehicles.

Not much I don't like about this truck, but MPG with a Hemi combined with heavy loads means 12-13 mpg consistently. Not sure newer trucks would do any better with my 1000 lb load in the back. Highway mileage is only 16-17 at best.

Brakes warped rotors until I wised up and bought something besides OEM. Braking not the best but not bad either. Not touchy like some.

Dodge does not have the best reputation for reliablity but it has really improved to the level that I think anyone still holding that grudge is living in the past. Have spent less than $500 on repairs in 10.5 years. Most of that was wheel bearings which on vehicles this size used hard like mine is practically a maintenace item.

My only concern is that when its time to replace this truck they don't make them like they used to. Normally I replace business vehicles after 5 years, but I've had no reason to even at over 10 years. 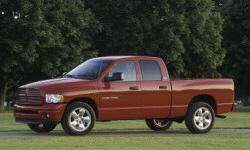 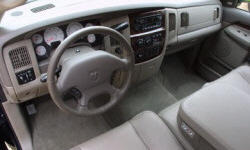