The Fiat 500 isn't really a family car, but it's a good commuter car if you have only one or two people in the car at a time. It's stylish, economical, and easy to operate.

It's not the sportiest handling car out there, but becuase of its small size, it's easy to maneuver in traffic and parking is rarely a problem.

I'm usually in the 32-35 mpg range with a mixture of city and highway driving. I have to push it a bit to keep up with traffic (101 hp engine) which is probably why it's a bit lower. Fill ups are rarely more than $30.

This car handles very well and is loaded with safety features. That makes me feel better about being in such a small car. The four-wheel disc brakes (anti-lock) are quick without being too grabby.

This car looks sharp on the side but doesn't sacrifice form for function.

Because of the small size, it has a rough ride to it at times. There's a lot of rough pavement in this area (more so lately because of ongoing construction) and while it's not harsh enough to rattle your teeth, you definitely feel bumps.

Forget about the rear seat unless you are carrying around people who really like you, or people with really short legs. There's plenty of room up front, but not so much in the back. I usually leave the seats folded to expand the cargo room.

My car was built before the Fiat 500 was equipped with a blind spot mirror, so I had to do some careful mirror positioning to be able to safely monitor my blind spots. Visibility out front is great; back is fine too but the headrests get in the way.

My car has the Bose system and I've been pleased with it. It uses the Blue & Me Bluetooth system, which is a bit of a mixed bag. It pairs nicely with my phone and lets me send and receive calls while driving, but it gets a bit quirky from time to time. I don't have a Bluetooth music player but there's a USB port in the glove box I can use for my iPod. 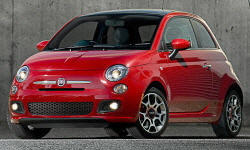 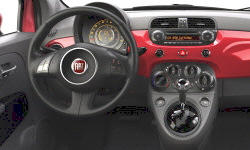