2014 Ford Expedition Pros and Cons at TrueDelta: Waste of space unless you tow very heavy things often or long distances. by sasolomon

The Expedition EL is a showcase of American excessiveness. People who buy these behemoths convince themselves that they "need" all this real estate, instead of the rest of the world that uses what they actually need. Here are the arguments you will hear from buyers:
- I NEED extra ground clearance for the gravel roads I go down twice a year.
- I NEED space for 8 adults that I might have to carry for 20 minutes, every so often.
- I NEED a big V8 to tow my bike rack.
- I NEED storage in the back, in addition to the roof rack, with the third row fully up so my kids can bring half our house with us to the beach once per year.
- I NEED to protect my family with as much steel as possible.

The fact of the matter is, those NEEDs are better served by a minivan. These are the same people who protest when gas prices go up $0.20 and are adamantly against a fuel tax increase to offset the damage caused to roads by this 6000 lb porker, but bitch and moan about potholes. And minivans perform much better in crash tests than these things, besides the fact the rollover risk is 10x less in a van with the lower center of gravity.

On to the specifics.

Are there things it does well?

The EL provides a lot of room behind the third row for storage, and even has a nifty lift up panel to hide stuff or segregate items up against the third row. However, if you are short, you will have a difficult time reaching it and even if you are tall, it isn't easy to reach the panel to lift it nor access anything in the storage area.

There are plenty of cupholders and storage areas, reasonably easy to access. They hold water bottles (plastic and insulated reusable) effortlessly.

Both the second and third rows have ample room, with and without kid's car seats, for three across. The third row isn't an afterthought like in other SUVs and even 5'11" adults are happy back there. Additionally, the vents provide adequate AC in 100+ degree heat. There are plenty of easily accessible LATCH anchors if you wish (although seatbelts are generally just as easy and have a higher weight rating with car seats than the LATCH anchors). Most minivans (except the Odyssey) do not have LATCH in the center of the second row - only on the outboard - and only have LATCH in the center of the third row. The Expedition (and Odyssey) is nice because they are flexible where you can put car seats comfortably.

The driven Limited trim had black heated and cooled front seats. The cooling was necessary in the summertime Texas heat and perfomed well - I turned them on every time I got in the car (unlike the Lexus system, that you can leave on as it is a dial, you have to activate the cooling every single time you restart the car). These thrones were comfortable for a 4 hour drive - there was more room for someone who has more girth than I. Also, adjustable pedals are a great Ford innovation that I wish more manufacturers would include. My wife (who is 11 inches shorter than me) could easily drive this beast comfortably, without sitting too close to the steering wheel.

Seriously, what a pig. Not towing - mostly highway (over 400 miles worth) but some city driving as well - in 600 miles, we averaged 13.9 MPG. The car's computer appears reasonably accurate (as a rental, I do not know if it was really full when picked up but the second tank MPG was within 0.5 MPG of my calculation based on mileage). Yes, there were generally 6 passengers (4 adults, 2 kids) and the AC blowing (front and rear) to combate the Texas heat, but I was light with the thottle and it was quite flat. I am well aware no one will buy one of these based on gas mileage but this performance is just abysmal. Hopefully the next generation will improve.

It is a truck. Even loaded, it bounds around stiffly and is rough on all pavement. Minivans have this thing beat every which way to Sunday in ride quality.

The Expedition is easily a generation behind with the dot matrix-like dash display, confusing menus and automatic climate control that wasn't so automatic. The Sync system worked well, with snappy bluetooth and a readable screen, as well as easily accessible menus with the buttons on the sides. That being said, there was little ability to use the controls without taking eyes off the road, a somewhat scary proposition when you are piloting something that weighs about 3 tons. If I was towing, I would appreciate a transmission temp gauge instead of voltage (or even oil pressure for that matter). I'm well aware that most of these gauges don't move at all within a fairly wide range of acceptable temperatures and don't work any better than idiot lights, but a man can wish for a true gauge.

Even thought this vehicle is primarily used as a grocery getter and soccer transporter, it fails in emergency maneuvers (the traction / stability control reigns things in nicely at least). The naysayers will say "it is still a top-heavy truck" and that is true - but vague steering is vague steering.

Not only is there no dead pedal, there is no place comfortable at all to put the driver's left foot. I had to sit with my left foot flat on the floor with my knee at a 90 degree angle. At least the seats are comfortable. The parking sensors (front and rear) are a complete waste. They do not have much vertical range and are so high that they cannot sense anything close to the bumpers but not at the same height as the sensors (and no cars are the same height at all). Also, they do not start beeping until you are about a foot from whatever obstruction you are nearing - so you have to know to stab the brakes quickly if it beeps at all. Kudos to Ford for the blind spot mirror inside the side view mirrors - you wouldn't be able to see anything at all next to you without that mirror. Not only is the vehicle too high and the windows too high, but you can only see semis directly behind you. I was stopped at a stoplight and saw a VW New Beetle pull up behind me - the entire car disappeared from my rear view. The mirrors are well aimed. The rental did not have an owners manual in the glovebox, but i would have thought it to have more clearance than 6'5" - the roof (maybe the roof rails?) hit a clearance sign indicating 6'5" is the tallest vehicle allowed in a parking garage. I had to slowly reverse out, less I smacked a ceiling beam Ior worse, fire sprinkler pipe).

Very few reasons to choose this over an Odyssey / Sienna / Town & Country. Those reasons are: towing, carry 8 passengers frequently and/or long distances, or hefty vehicle occupants (seats are wide and cushy). Oh, one other reason - you have access to cheap fuel, but even then, considering the price premium over the vans, there is little reason to buy one of these.

Of course, the prime target buyer probably is too self-consious to buy something with sliding doors, and they do "need" that space. Or think four wheel drive will help with the snow twice a year. Or whatever excuse they come up with. After looking at the inside of a new Yukon XL (also on the National Car rental lot - but not driven), the GM product (newly refreshed) looks light years ahead of Ford's somewhat tired design. I would imagine the Sequoia/LX and QX80 are competitive as well, but possibly even less value. I will let Mr. Karesh answer those questions for you (and use the TrueDelta tool to compare features).

More About the Expedition 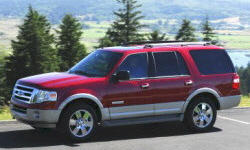 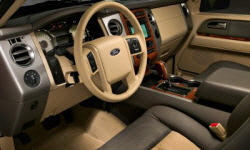