It is a true subcompact, not a great choice for a large family (or family with more than two large people in it) but perfectly capable of taking 4 average-sized people on long trips and 5 on shorter ones.  Very quiet for a subcompact (especially if you replace the OEM tries), one of the best for fuel economy among conventional gas engine cars, fun to drive, modern electronic amentities; and excellent ride, handling and steering feel.

Cargo space in the hatchback is smaller than the Fit and less versatile, but quite adequate if you know how to pack.  5-speed manual is a pleasure to use and easy to learn for those inclined.  Lovers of conventional slushbox automatics may find the 6-speed automated manual quirky, but it works well for everyone else.  Theme of the car is simple and inexpensive but effective, from the suspension, electric-assisted steering, manual seat height adjustment, spotting mirrors, and phone-based Sync features that don't carry monthly charges like some competing systems.  Excellent safety ratings for a car of this size or even larger.  Surprisingly good handling and traction in snow and on unpaved roads.  In my case at least (2011 Hatchback with 5 speed manual) the Fiesta has been completely reliable, and needs only one inexpensive service per 10,000 miles/1 year.

Quirks: inexplicably tall rear head restraints that reduce rear visibility; low ground clearance in front; 5-speed manual pops out of reverse in certain cases (maybe intentionally); air conditioner is strong but saps engine strength especially around 2000 rpm (an Econ AC setting that cuts off during acceleration would be have been most helpful).

There have been a number of small tweaks in 2013 and 2014.  2014 is introducing the high-performance ST model (which is a story unto itself) and later on a 1 liter ecoboost model with still unknown but potentially spectactular gas mileage.

Excellent handling while still a comfortable ride compared to other inexpensive cars. Very little body lean. Very nimble and "tossable". Electric-assisted steering works extremely well, better than typical hydraulic-assisted power steering. The only exception I found is going over speed bumps, which bring a "clunk" from the rear torsion bar. On handling and interior space it falls somewhere between the Honda Fit and the Mini Cooper S. Also very well-behaved in snow and on unpaved surfaces (dirt, gravel, sand, grass, leaves), competitive with the all-wheel-drive Subaru Legacy Wagon I had previously.

Surprisingly quiet for an inexpensive subcompact and good sound deadening, aided by a strong body. Very little wind noise and no creaks or rattles. Some road noise from factory KUMHO tires, completely eliminated by switching tires. Continues to be quiet over 80 mph, which is as fast as I've had an opportunity to test it. I'm not sure exactly why, quietness may be a part of this as well as the steering and seat design, but I find I can drive my Fiesta very long distances with less fatigue than any other car I've driven on long trips. I also find I stay alert in this car much more easily.

One of the best combinations of fuel economy and purchase cost you will find in the US. Among the most fuel-efficient inexpensive subcompacts on the market today (though it can be beaten in fuel economy by a number of hybrids that cost significantly more). I've gotten 29-30 mpg in pure city driving, 33-35 in suburbs, and 37-46 on the highway. 5-speed manual has a somewhat lower than ideal 5th gear, which hurts gas mileage over 65 mph (37 mpg was at at 75 mph, 46 mpg at 55-60). Also has a larger than typical tank to go with that efficiency (12.4 gallons), giving you a useful range of up to 500 miles on the highway, and a good 100 miles more per tank than my previous car. Wish list:

Good to excellent safety ratings and crash test results on 3 continents (US, Europe, China). Very strong body, 7 air bags, and nimbleness that makes accidents easier to avoid. A cost of this is that the body and safety features make the US Fiesta surprisingly heavy (over 2500 pounds), and the doors are stiffer than usual in order to gain strength against side impacts.

Rear head restraints are outrageously and uselessly tall, as if they were designed for a much taller vehicle. They unnecessarily impair rear visibility and get in the way of folding down the rear seats. On the plus side front visibility is good, there is a simple but effective driver's seat height adjustment, and there are useful spotting mirrors on both outside mirrors.

Factory Kumho tires are noisy and have very little grip, especially in the rain. Fortunately this is easily correctable by using Michelin Defender or similar when replacing them.

Rear seat does not fold down flat, and overall cargo space in the hatchback is significantly smaller than in the Honda Fit, which is about two inches longer and taller. Overall interior space is at best average compared to other true subcompact (B) cars; this is not a good car for a family of large people. However, the hatchback is still versatile, and I've used it on long trips with my family of 4 by packing efficiently. In compensation vs. the Fit, it is typically less expensive, gets better gas mileage, handles better, and is quieter.

Overall, an excellent general purpose small hatchback that does all of the important things well. Of course, unlike me not everyone likes small hatchbacks. I compiled a list of over 30 things I thought were flawed in its design, but it is still hands down the best car I've ever owned. In comparison, the last subcompact I owned (a Dodge Colt) was a noisy, underpowered deathtrap with no handling ability at all, despite being considered a decent car in 1987!

At times I would like to have a larger car, but not often, especially when it comes to parking which I typically have to do at least twice a day. And the rest of the time I'm enjoying the gas mileage and general goodness of this car.

More About the Fiesta 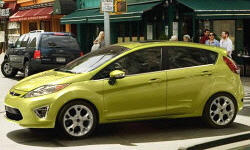 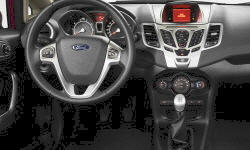