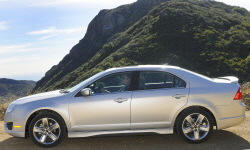 Anyone with a 2010- 2012 Ford fusion or 2009 - 2012 Mazda 6 - these carswhere built on the same assembly line and many of the non-exterior parts are FOMOCO sources. Anyone experiencing severe rust/corrsion on the engine cradle under the car and/orfront or rear subframes?

First of all, while it's seemingly not important, we might as well set something straight. Those two different models were not built on the same assembly line. They never were. The Fusion is built in Hermosillo, Mexico and the Mazda 6 is built in Flat Rock, Michigan. They share many components, but are largely different vehicles.

Is the rust you're experiencing causing any issues? It may just be surface rust if the vehicle is exposed to road salt or is parked near salt air in a coastal area. You did say severe, so I'm curious as to what the rust has affected so far. The vehicle's corrosion warranty is 5 years, unlimited miles. Does your vehicle fall within the warranty? I realize that it's unlikely, as you'd have a very late 2012 for that to be possible, but the closer you are to it, you may be able to get some type of support from Ford if the issue is serious enough.

Totally unrelated car, but nearly the entire subframe was starting to rust on my 2008 Ford Taurus X. I have a friend with a lift. Visited his garage, removed all of the loose rust, then coated the subframe with Chassis Saver. I did this last fall. Haven't yet checked under the car to see how well it held up over the winter.

The relevant part: they don't appear to have finished the subframe well. It was virtually designed to do this.

Subframe was completly rusted through and cracked. Car would have failed inspection this fall. If it had been a horse it would have been sent to the glue factory . Car was worthless as was so had to replace subframe - rec'd no support from Mazda as I was past warranty (2009/80k) however should have argued that frame did not rust only after the warranty. They offered me $1000 off a new mazda but nothing for the repair and that was after several back and forths. Not a company I want to do business with again soon.