2017 Honda Accord Pros and Cons at TrueDelta: Yes, This Is The Hybrid To Get If You Want The Best All Around Experience by gemail.paradox

In case you didn't notice, this is the second Accord Hybrid in my garage. The 1st was a 2015 model. That model was an eye opener to my wife & I. It drove fairly normally as cars go. It took no special technique to get 40 MPG in real world, city driving, and the best part, surprisingly, is not the gas mileage, but the range between fillups. I have friends that have the Prius, but it's tiny gas tank allows them to gas up as frequently as any other gas powered vehicle. The Accord Hybrid can go 500+ miles before gassing up and that's just to the 1/4 tank mark. My wife uses it as the daily driver & she has learned how to drive a hybrid so she gets disappointed if she gets less than 44 MPG per fillup. It excels in rush hour stop & go driving. So, after 2 years in the 2015 and an opportunity to replace my daughters car came up. Gas is cheap, so hybrid sales are languishing. We swing a deal for virtually the same vehicle for over $3k less than we paid in 2015. We take the 2017, my daughter buys the 2015 (for a steep discount - poor resell for hybrids, you know) and everybody wins. If you can afford to, upgrade to the 2017 from the 2014-2015 models.

After a week in the 2017, we find major improvements in the details over the 2015. It rides quieter and is not as harsh over road imperfections. It has LED fog lights, lower rocker extensions, and the engine sounds less coarse. The navigation/infotainment touch screen is worlds away better than the 2015. The touch response is a hugh improvement over the 2015 and entering the address is much more straight forward. The navi software is supplied by Garmin and the map screen is a much crisper, higher resolution screen. In fact the map has been moved to the lower screen & the info from the lower screen on the 2015 has been moved to the upper screen. The dial/joystick that controlled the inputs for the navi/infotainment unit on the 2015 has been ditched, so that area of the center console is now a cubby behind a door so you can store your USB cable there out of site (USB moves to behind the the door as well). This opens up the spot on the console for an open area cubby to place your cell phone or whatever. The trunk space has been improved to the point of almost normal. The gas tank, unfortunately, has been downsized about 3/4 of a gallon so we expect that the total range will drop. When we run a few tanks of gas through the car, we'll see how much range we lost. The headlights are now full LED (low/high) whereas the 2015 was just LEDs on the low beams. On paper, the total horsepower has improved by 16 horses, but in real life, we can't tell. When it breaks in, maybe we'll try a full throttle start and see if we can feel the difference, but to tell you the truth, the 2015 was plenty quick enough - according to car & Driver magazine, it can do 0-60 MPH 1 second quicker than our old V6 Acura TL. The windshield wipers are now rain sensing vs. the 2015's interval wipers. The radar sensor is now covered by a panel in the lower grill, whereas our 2015 was imbedded at the end of a small tunnel in the same location (snow could get stuck in the opening of the tunnel & block the sensor).

The only features we wished had improved would have been the memory seats to include the mirror & steering wheel positions and an electronic parking brake. Otherwise the improvements done on this model vs. the 2015 and a substantially lower price made this buy a worthy one.

If you are in the market for a fuel efficient car & need a large sedan, this is the one to consider. The only way to get a better deal is to buy a used 2014/2015 Accord Hybrid, but if you can afford it, spring for the 2017, especially now while gas prices are low. Be sure that you can get by with a smaller than usual trunk that doesn't have fold down rear seats and you should be good to go. If your commute is in stop in go driving, a hybrid (any hybrid) is the way to go. If you have long freeway commutes in low to no traffic, get a diesel.

More About the Accord 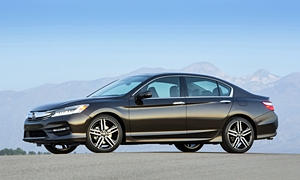 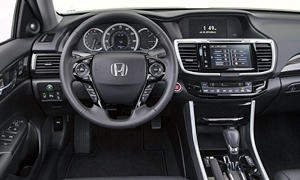