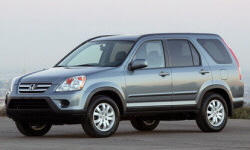 I\'ve owned 3 different CRV2001, 2012 and now a 2010.. I put anywhere from 40k to 50k miles highway a year... My budget is not for a new car and the more research I do it seems that 2nd generation 05 and 06 are really good and 3rd generation 10 and 11 are really good so I have an opportunity right now to buy a 78K 06 no accident well maintain 1 owner LX and I\'m wondering if that is the model to get or if I should try and stick with something a little newer like the 2010 11 however those generally cost about $3000 to $5000 more..
Anybody have a 2006 that they wanna give me some Information on being confident or not confident in that year?
I routinely have the oil changed . And baby the vehicles so they last n have good trade in value..thnx

My neighbor who owns the 2010 swears by it. We live on a mountain so with snow tires, AWD, and additional ground clearance climbing it while the snow is getting fairly deep is not an issue. The only issue is the cliimate control which failed once after 6 years and is apparently having some problems again at 10 years - and he is considering getting rid of the car for a new one.

According to Consumer Reports the 2006 is pretty reliable still. There are no below average catagories and for average repair issues you only have Climate System, suspension, brakes, and power equipment. Overall reliablity is above average for the year.

For the 2010 the overall reliablity is still above average but the climate controls are the worst rating of way below average (which my neighbor shares that setiment), and body integrity is average (squeaks and rattles).

Overall, for used cars they are pretty good values. I would have a mechanic check it out and one time I posted a list you can use to check it out pretty well yourself - but it did not post well on this site. Best of luck.

Honestly, I'd get the 2nd gen 2006 that you found. The 3rd gen was not quite as reliable, but still good. If you are looking for better safety, more modern features and interior, then look for a newer generation. With the 2006 you'll be getting an old reliable car in good condition, which is a good thing in my book.

My nextdoor neighbor has a 2015 CR-V and it has the idle vibration issue that is so common in those. She doesn't like her car. My other neighbor likes their 2007-2009 CR-V. They also have a VW Atlas and they still use the CR-V to tow small trailers because they know it'll make the trip. The third gen does have the A/C issues.