2013 Hyundai Azera Pros and Cons at TrueDelta: A Generic Mid-Sizer that does everything right! by bigtruckseriesreview

The Hyundai Azera offers just about everything you'd expect to find in a typical $35,000 economy car, but its fit and finish help it stand above the pack. Completely satisfied in this car over the Toyota Avalon 2013 and I would lease again!

The Azera has an attractive exterior shape that helps it stand out, regardless the color you choose. Brighter colors such as Silver, Metallic Grey, Red and Champagne make it stand out in a sea of Toyota Camry and Honda Accords. Interior colors are limited to black and caramel on the "Limited" models. It's a shame that "White" seats and trim such as those in the Kia Optima aren't available.

The Azera, being a larger car than the Sonata offered a V6 engine with 293 HP. Unfortunately, AWD was not an option. However, because of FWD dynamics, AWD wasn't extremely necessary in NYC since we don't recieve major snow as often as the North East. The Hyundai Genesis is replacing the Azera's position and the Hyundai Genesis offers a 3.8-L V6 with AWD at a higher price. ($41,500). The Azera accelerates very well, very smoothly and the 6-speed performs well on the highway and in the city. No bumps and very linear performance.

The steering wheel does not telescope back very far and also cannot be angled much higher to accomodate larger drivers. It's comfortable enough for smaller drivers, but larger drivers may find it awkward. There's plenty of leg-space in the rear, but the seat track doesn't take advantage of it to give larger drivers more room.

The equipment list in the Azera is quite impressive. At $37,000 fully loaded, I have heated/cooled seats, panoramic roof, power rear sunshade, and a number of other automatic features. As the Azera is being discontinued, the price of a loaded model has been bumped to $39,000 in order to streamline trim availability into just two trims: "Azera" and Limited . A number of new safety nanies are features such as lane departure warning, forward collision warning, blid-spot warnings, etc. Everything is easy to use and with considerable training and practice, the voice-activated navigation system is usable, although it's far easier to simply pull over and input manually.

"Dealer Practices" brings me to a very humorous story. I brought in another car to trade in towards the Azera lease and the day was growing late. The banks were probably closing or closed and it became obvious to me that the dealer wasn't ready to draw up the paper work for the car. Sensing that "letting us go" migh give Toyota time to put us in a new Avalon, Hyundai LET US BORROW THE AZERA OVER THE WEEKEND before the deal was finalized. We took it, drove it, enjoyed it and then returned to sign the deal. The numbers were slightly higher than we expected and we decided to change our financing plan to purchase it. When all was said and done, we drove off with a new 2013 Azera on lease till 2016. Hyundai is up against a lot of competition and from what I've seen, they'll say and do anything to get a commitment. Their cars have gotten considerably better and more competitive, but at the same time, their prices have grown - shrinking their competitive edge with the likes of Toyota and Honda.

More About the Azera 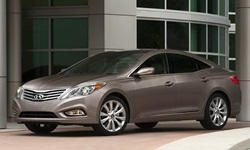 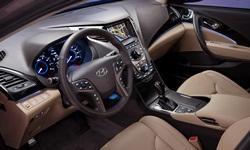