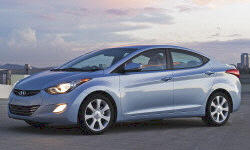 I looked at Consumer Reports which polls a lot of owners on their cars and they don't post anything unless 50 owners respond on a specific model. On this model they meet that standard every year. Note that CR does not give a lot of leeaway from a perfect score, that after three years if more than 1% or so have a problem it drops from a perfect score to average then below average as the percentage rises. So for an 8 year old Elanta they would give it about a 7% failure or problem rate before lowering the reliablity rating on the five point scale (from way above average to above average) and then average if the problems rise to 9 or 10% and more if it goes higher than that.

So for those years, the Elanta scores either much above average or just above average on all the engine and transmission catagories. In other words, on those specific measures, it does qutie well.

Note looking across the web there are some other measures:
Paypal reports 267 people reporting a problem with shifting problems and another 48 report new software is needed to correct another shifting issues. So there are issues, but not many:
https://repairpal.com/hyundai-elantra-2011/problems

On Car Complaints for 2013 11 have replaced their engine (very few):
https://www.carcomplaints.com/Hyundai/Elantra/2011/engine/

So generally speaking it is a reliable car for the majority of people on those two measures. Looking at CR overall, Suspension, brakes, and electronics can be some problematic spots but overall the ratings are average or above for cars that old on the Elantra. In other words, not a bad bet.

Buying one have a mechanic review it if you don't know how to trouble shoot cars yourself. Best of luck.