I was replacing my old vehicle, and I wanted a specific body length that was similar to my old car (2005 Chevy Equinox LT AWD). I also wanted similar "power" (Chevy was a V6). As a result, I test drove/compared against: Nissan Murano, Subaru Forester, Subaru Outback, Ford Edge, Kia Sorento. Technically the SFS (Santa Fe Sport) was 4" shorter than my Equinox/Edge/Sorento, but that was acceptable. (The Murano, BTW was approx. 4" longer). Of my 3 finalists: Ford Edge, Hyundai SFS, Kia Sorento, I liked the interior styling of the Edge/Hyundai the most vs. the Kia Sorento. I found the center console of the Edge/Hyundai to be very similar with a more modern look (the AC vents are on vertical, and on the sides of the LCD Display). I personally preferred the Ford the best, but due to no availibility of the Titanium trim with the options I wanted, no dealer was willing to sell for anything less than MSRP. The 2017 SFS Sport 2.0 AWD Ultimate w/tech package is what I chose. I find the interior styling to be fairly modern and stylish. Obviously this is a personal taste. Ford was my #1, Hyundai was #2. But I am happy with the interior styling and the steering wheel controls are much more usable, IMO vs. the Kia Sorento with it's 4 scroll wheels and multiple buttons.

I was replacing a 2005 Chevy Equinox AWD LT v6 averaging 18.5-19 mpg combined, so I wanted something that got at least 19 mpg combined. I am averaging approximately 22.5 mpg right now.

Because I had so many problems with my 2005 Equinox (2 blown head gaskets in 12 years, at only 74k miles, numerous other issues) I wanted a vehicle with a warranty that was better than 3 years.

My previous vehicle (2005 Chevy Equinox AWD LT V6) was not very reliable. Over $10k in major repair costs over 12 years. Not talking about things like tires and brakes either. Head gasket repairs, carrier bearing, drive shaft, fuel pump, etc. I wanted a vehicle with a good reliability rating. The Ford Edge had listed some "major" concerns for me (the 2015 had water leaking issues, the 2016 had sunroof issues along with body rattles/creaks due to poor welding). The Hyundai SFS appears to have few major issues like that.

During my test drives of all vehicles, I used a sound meter to measure the loudness in db. All vehicles were test driven on the same route, and with the sunroof SHADE open (but not the sunroof itself). My testing indicated that my 3 finalists: 2016 Ford Edge Titanium, 2017 Kia Sorento SXL, 2017 Hyundai SFS 2.0T Ultimate w/tech The Ford Edge was the quietest at 64-65 db Kia and Hyundai were at: 68-69 db and 68-68db respectively. However, this was acceptable because of the purchase price differential of almost 12k between the Ford Edge and the Hyundai SFS. If Hyundai put acoustic glass (like Ford) and more noise dampening material in the wheel wells and engine/firewall area, I believe the vehicles would be comparable. However, I could probably have the entire vehicle sound dampened (not the glass) for 2k professionally installed, and still have saved a lot of money.

All 3 vehicles I test drove: 2016 Ford Edge Titanium Ecoboost, 2017 Kia Sorento SXL and the 2017 Hyundai SFS 2.0T Ultimate were about the same in terms of ride comfort. However, none were as smooth as my old 2005 Chevy Equinox. This is probably due to 2 factors: 1) Chevy had 17" wheels/tires. All 3 new vehicles had 19" wheels/tires 2) Suspension on all 3 newer vehicles is tightened up for better cornering, at the sacrifice of smoother ride quality. I plan on test driving the 2017 Hyundai SFS with 17 and 18" wheels and if there's a noticeable ride quality difference, I will be switching wheels down to 17" or 18". I do know on the Ford Edge test drive, I had test driven a 2015 SEL which has 18" rims and it was a better ride than the Titanium Edge on 19" rims. I can't imagine going up to 20" rims.

While my finalists were in order of preference: 2016 Ford Edge Titanium AWD Ecoboost 4 cylinder with 302A, Drivers Package, and Cold Weather Package 2017 Hyundai Santa Fe Sport 2.0T Ultimate w/tech package 2017 Kia Sorento SXL The MSRP were: 45.5k, 41k, 47k respectively. However, the Ford would've needed a 2k warranty upgrade to get equivalent to the Hyundai, plus an other $600 for the smartphone remote start system, plus an other $350 to fix the seatback cooling issue (known issue on the Fords). That would've put the Ford MSRP at 48.5k NONE of the dealers in my area had the trim level with packages I wanted. A nationwide inventory search revealed only 3 left in the US and as a result, none of the Ford dealers would deal. They all wanted full MSRP for the car. The "best" offer I got was $39.5k (with trade in, but before taxes/title/registration), not counting the additional 3k in warranty/smartphone/cooling fixes. My Hyundai dealer gave me $30k with trade in (before taxes/title/registration). therefore, I could not justify the $12.5k price differential in favor of the Ford given the MSRP was only 4.5k different. $12.5k is not worth 4db quieter vehicle and the Sync3 system (as much as I liked it). I could spend another 2k on the Hyundai to get it sound dampened and probably 1k for different wheels to get it quieter/smoother ride, and still have saved a ton of money. Plus the warranty (I keep my cars 12+ years) was also a factor.

Overall the Hyundai SFS fit my needs and wants. I did not want the larger Santa Fe. The vehicle is very nice and the price, IMO, cannot be beat.

More About the Santa Fe Sport 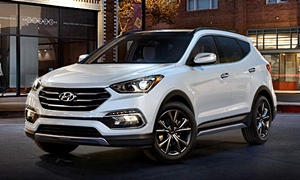 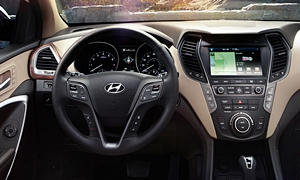