2020 Hyundai Veloster Pros and Cons at TrueDelta: A Carnival Ride for Public Roads by misternoisy

Visually, the 2019+ Veloster is about as weird as its predecessor, just flavored with Hyundai's current design language. Same general size (which splits the difference between the Ford Fiesta and Focus), same three-door layout and 2+2 seating and the same somewhat upright windshield and sloping roof (which does cut into rear headroom, though not as badly as the outgoing model). The hatch that hinged right over the heads of the rear passengers on the Gen 1 Veloster has been replaced by one that's more conventionally located, so there's no risk of injury to back-seat occupants when you close the hatch at least. The proportions are reminiscent of a bulldog - short, wide and chunky. The N has a fairly cartoonish spoiler with a centrally integrated triangular CHMSL that says 'boy racer', though not as loudly as the spoiler on the Civic Type R. Other N-specific styling touches are the front and rear fascias and side skirts, which all receive red-painted accents to announce the car's sporting intent (unless you order the red paint, in which case they're all black), cartoonishly large dual exhaust tips and optionally an unusual solid powder blue paint color that Hyundai calls Performance Blue, which is repeated intermittently in the interior (seat belts, trim pieces) on all Veloster Ns regardless of exterior color. It's definitely it's own thing, just as the previous generation car was.

The 2 liter turbo in the Veloster N pulls hard, and with the N-mode settings turned all the way up, sounds fantastic as well, with happy bursts of pops and crackles when you lift with the exhaust set to the Sport+ mode. Power delivery is very strong from just under 2K all the way through about 5500 or so, tapering off somewhat as you run past that to the 6750 RPM redline, and little shift lights will illuminate at the top of the gauge pod as you get there. The gas pedal is quite progressive, especially coming off of my Focus ST, shich had a more on/off feel to it - you can be very specific in how much power you want in this car. The shifter has short throws and is reasonably precise - there's a bit of notchiness, but everything is quite natural to use, and it doesn't fight you when you try to make things happen quickly (something I couldn't say about my Genesis Coupe). The clutch pedal is light and easy to modulate, as are the brakes - someone clearly spent a lot of time getting these things to feel right.

The Veloster N has heroic levels of grip and playfulness baked in if you get the Performance Pack. Coming off the torque-steery nature of my Focus ST, the front end feels better sorted, though you do lose some steering feel compared to that car. Very minor torque steer is evident, but it's still there to let you know when things are getting a bit too close to the edge. The eLSD (only available with the Performance Pack and worth the price by itself) is pure magic through lower speed corners taken at higher speeds. Lifting when you're caning it will produce easily controlled oversteer as the combination of the chassis tuning, LSD and Veloster N-specific Pirelli tires work together to make you smile - you pitch it into a corner and the car catches you. It's less raw and a bit more filtered than a Focus ST, but more competent and at least as much fun to drive.

The Veloster N is most assuredly a stiff-riding car. 'Normal' mode is acceptable for daily use, but nobody would say the ride is plush. It is well-damped in that mode, but building a short wheelbase car has consequences and Hyundai hasn't quite figured out how to defy physics just yet. The Sport and Sport+ modes are borderline unacceptable outside of racetracks or perfectly manicured asphalt.

Visiblity is an issue in the current Veloster as much as it was in the previous generation car. The windshield is short and more upright than other sporty offerings, meaning that you'll be spending a lot of time craning your neck to see stoplights. Rear visibility is slightly enhanced compared to the last-gen Veloster only in that you don't have a spoiler splitting the rear window. The B/C (depending on which side of the car you're talking about) pillars are enormous, so you'll find yourself spending a bit more time on those shoulder checks than you would in other cars. I will say that I like the single door driver's side just because that it means I don't have a door pillar right in my way on the left side. Since this is the Driving Position category as well, I will counterpoint by saying that the seats and driving position in the VN are fantastic - it's easy to get confortable and the cloth buckets are fantastic for all-day stints or hard charging. They manage to hold you in place for spirited activity, yet remain easy to live with when you're using cruise control for three hours straight.

Any color you want as long as it's white, black, red or powder blue.

Features are pretty limited in the Veloster N. You get a decent stereo, Apple CarPlay and Android Auto, single-zone climate, Bluetooth and SiriusXM. but that's about the end of the amenities list. If you want more safety and creature features (or an automatic transmission), the 1.6T-equipped Veloster Ultimate costs about the same, but doesn't get any of the go-fast parts of the N. I personally love that the N is almost an entirely different car that's focused on driver enjoyment and willing to sacrifice the other things to arrive at an affordable price point.

There's honestly not a lot to say about the interior of the Veloster. Compared to the 'still weird' exterior, the interior is shockingly conventional. The two-dial primary instrument pod with a central information screen wouldn't look out of place in any of a number of cars, while the 'we stuck a tablet on your dashboard' infotainment system is just as incongruous as it is in every other car that uses this form of touchscreen 'integration'. Fit and finish are excellent - everything is tight and there aren't any untoward squeaks or rattles. That said, materials are definitely a place where costs were cut. The plastics are hard and black and that's about it. While they should hold up well, they're not going to impress people that are all about 'soft touch' or upscale materials. Thankfully the use of glossy black plastics is pretty limited. One high point is the inclusion of physical controls for most commonly used functions. Infotainment, HVAC and even menu shortcuts all have physical buttons and dials, allowing you to sidestep poking through touchscreen menus. The Veloster N spices things up a little bit by sprinking bits of light blue in the interior - the seat belts, the drive mode buttons and minor trim elements are all rendered in 'Performance Blue', no matter what color the paint is on the exterior - Hyundai has seemingly laid claim to this shade of blue as the N brand's signature color.

The Veloster N is maybe the craziest car on sale right now. The unconventional layout, the love it or leave it 'look at me' appearance, the sacrifice of almost every comfort and convenience feature in the name of giving you fun stuff like a 275HP turbo motor, big brakes, crazy good handling chops and a hilariously flatulent exhaust note all wrapped up in a car that costs less than $30K... This is a car for people that would still rather be driving than texting.

More About the Veloster 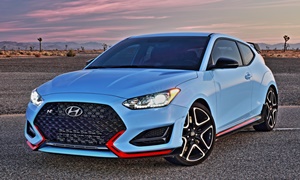 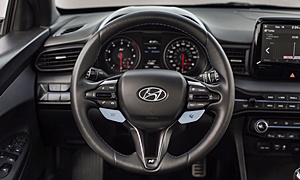