What do you think about this vehicle? 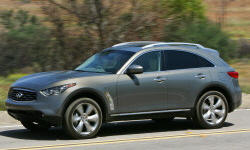 JUST INTERESTED IN THE RELIABILITY OF THIS PARTICUALR VEHICLE.

I would skip the 2009 because the 2009 was the start of a redesigned model. Reliability unknown across every website I've seen, but I remember when CR had reliability that it was about average. I rented a 2009 and I thought it handled well, but it wasn't that comfortable.

Unfortunately, as Lectrofuel states there is no relaiblity data on this model since it is an older model and they apparently did not last in the marketplace (or sell well enough). I personally would avoid it as Nissan/Infiniti is not particularly known for quality as it has steadily gone down since its partial intergration with Renault when they were in financial trouble.

If your are bent on getting this car, then avoid the first year as a standard rule as Lectrofuel stated.