It has aggressive styling that hints at the raw power of this sedan. The 2010 has moved the front fogs to a more traditional location which balances the front.

While easy to handle at low speeds, the car tightens up in corners and inspires confidence at higher speeds.

The brakes are on-par with Porsche and Ferrari, need I say anything else? Crash ratings are 5 star (except front passenger at 4 stars).

Despite the high-performance, the G is rated above-average, same as our G35 - which has only been in for routine maintenance (and a couple of recalls). The old G35 only parts needing replacements in 7 years were the two clock bulbs.

Seems smaller than the G35, no rear reclining seats anymore and the headrests stick up a bit more than the old car.

Navigation data is below par, have purchased a Garmin unit instead of the upgrade. Infiniti provided no satisfaction when complaining about the Nav system. I would say that 20-25% of the time the data is so bad it takes us to non-existent restaurants and stores (in the middle of long-standing residential areas) or on the wrong side of a freeway or tracks from the destination. Despite the Garmin being only $ 129 with lifetime quarterly updates, it is far more reliable than the Infiniti system.

More About the G 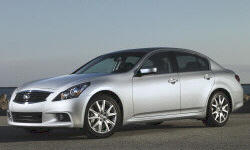 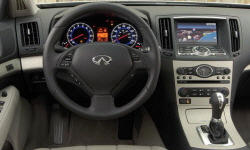