2014 Infiniti Q50 Pros and Cons at TrueDelta: Infiniti still makes the most reliable cars you can by IMHO by bentrodri

The Q50 is my 6th Infiniti. I lease a new one every 2 - 3 years. I've had the Q50 for 2.5 years and have put 40k miles on it. As with my other five, the reliability is second to none! Prior to Infiniti, I had a BMW 540i that was a nightmare to keep running. I test drove my first Infiniti while at a dealer that was fixing the 540, who also happened to sell Infiniti in the same complex.
The fit and finish are exemplary, as were all my others. This is remarkable as three of them were brand new models. I've always been a big fan of the power and the handling as well as the cars inate abilility to like being driven like it was stolen most of the time. I did get the DAS steering option and I love it. All these boy racer weenies in the car rags seem to bash it mercilessly. Not having to make the constant minor steering corrections is a joy on a long trip. My only gripes about this car were the run flat tires were standard. You can get a spare tire option and I replaced them already. The other ilk was the IN-Touch entertainment computer processor was not powerful enough to handle the apps they originally thought could be put in the system. Another great car from Infiniti!
PS: I just purchased a new QX50 for wife

Fit and finish are exemplary as are all Infinitis

Run flat tires are standard and really suck! Get the spare tire optin and get rid of the RF's as soon as you can. Felt like plastic.

I have a 2014 q50 awd S with DAS. I've had 2 G37x, 1 M35 so I think I know infiniti pretty well. The q50 is more refined than G37s (less vibration, less engine growl) even though they is still significant wind noise. It's not lexus quiet which is probably good at least for inifiniti fans. DAS takes some getting used to. The feel is different and at times it feels artificial like at very low speeds or idling. There isn't as much resistance as a normal steering system. I like sport mode , not regular, and I never use eco mode except out of curiousity. You can create a personal mode as well. You cannot set a new default mode which I find bizarre and irritating. The q50 seems slightly faster than the older g37 and braking remains excellent. The electronics are tolerable but prone to lag even in tech package cars. Hopefully 2015+ have better screen responses. I considered hybrid but the trunk space is 1/2 of gas versions.

The runflats don't handle bumps or potholes well. I already ruptured one and developed a bubble after a year. My tire package was definitely worthwhile. Overall, the q is more refined than g and needs a few improvements to be clearly better than G's. (better user interface - with better response, tweaking of DAS system) A new twin turbo engine may be coming out for 2016 which will increase performance further and push the Q into genuine competition with higher trim BMW,Audi, MB compact sedans.

More About the Q50 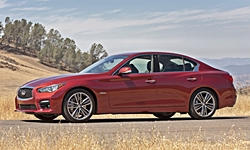 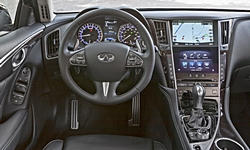