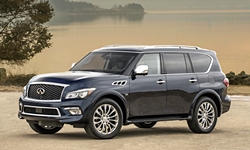 Looking QX80 was wondering how reliable the transmissions are. I think all other models such as pilot n highlander ford chev. Are having problems with more gears for better mpg.

I think you'll be fine with the transmission in the QX80. It isn't a CVT.