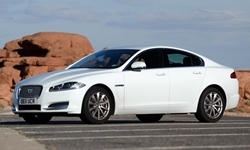 Is this a reliable car. plan to purchase a Jaguar XF 3.9 AWD supercharged

Jaguars in general are not very reilable. They are nice performance cars but they don't hold up well over time. The latest Consumer Reports has on them is that they are much worse than average in reliablity. Unfortunately True Delta does not seem to have enough cars in its survey to evaluate it.

I have owned two XF in the past three years and have found them both to be EXTREMELY reliable and with relatively low running costs. My 2014 2.0 T was traded in on a 2015 3.0 Sport. I found the engine in the 2.0 T to be harsh, and had too much turbo lag for my tastes. The 3.0 Supercharged is heaven to the ears and to the speedometer.

The 2014 had absolutely no issues whatsoever in the year and a half I owned. The 2015 did have the gas filler issue which was quickly replaced under warranty. The current one also had some annoying rattles and squeaks around the drivers C pillar / seat belt pre-tensioner which after many visits was finally completely replaced.

Ride is decent but not as plush as my 2006 XJ8. Handling is excellent. Quality of materials in relation to the new 2016 I had as a loaner is light years ahead of current offerings. Everything feels solid, well built, and built to last.

The trunk is large and I have the fold down seats and was able to accommodate a 55" TV from Best Buy. However, the trunk opening is rather small for larger objects.

The only downfall, I can see IMO, is very limited visibility out the rear and rear quarter necessitating use of mirrors and relying on the blind spot lamp notifiers in the mirrors.

Buy it - see you if you can get one certified with the Jaguar warranty which is 6 Yr 100k from in service date and enjoy!

You are fortunate. My neighbor had a Jaguar. Emphisis on HAD. He had a problem. The engine caught on fire from a fuel leak in the garage. That is virtually unheard of in this day and age. Probably is the fuel filler that was recalled on your vehicle. This was two years ago, and fortunately, his house did not burn down as well. Suffice to say it convinced all of us in our neighborhood not to buy one, and the one nearby Jaguar dealership is no more - it went out of business after that fire.

I am sure they are great cars to drive. I just don't want to deal with things like that.