I ordered this vehicle in 2013, and it only took eight weeks to arrive. It was well worth it. It's a luxury SUV at not much more than an entry-level SUV price. It has a comfortable ride, large cargo capacity, quiet interior, excellent towing capability, and comfortable seats.

My 2014 Grand Cherokee Limited has the smoothest ride of any vehicle I've ever ridden in. It's a much smoother ride than my 2004 Dodge Neon, and it's smoother than our 2013 Nissan Altima. I attribute the comfortable ride to the high amount of suspension travel, the optional air suspension, and the large-sidewall tires. Potholes and expansion joints are a breeze, and the Jeep stays firmly planted.

The next big selling point for the Grand Cherokee is the large cargo capacity. 8 foot long trim pieces from Lowe's fit down the middle, as well as our crib in the box from Buy Buy Baby. Since it has a hatchback instead of a trunk, I can fit tall and awkard-shaped items that a sedan cannot. Plus the privacy cover is very easy to use and remove, and it hides our valuables for when we drive into the city.

We ordered the Jeep with the towing package, which was not a very expensive add-on. The tow hitch is built in to the rear bumper beam, so it doesn't detract much from the vehicle's appearance. Also, both types of electrical connectors are built in, so trailer brakes are functional and you never have to look for an electrical adapter. When helping people move, I rent a U-Haul trailer at a flat rate and easily hook it up. Also, the towing capacity is 6200 pounds, so I have the option of towing my parents' boat when necessary.

The cabin is a very serene place to be, aided by the comfortable front seats. With the leather seat option, both front seats and two rear seats came with seat heaters. Also, both front seats are power adjustable, including height and lumbar. The lumbar support is great for long trips, allowing you to change wear the seat contacts your back for less overall fatigue.

Poor fuel economy was expected, so it's not a big complaint. Our V6 4x4 Grand Cherokee is rated at 17 mpg city and 24 mpg highway. We get about 18 mpg in the city and 24 mpg on the highway. Ourair suspension package came with full-time four wheel drive, which probably doesn't help fuel economy. I would like to get at least 20 mpg in the city, but perhaps I will shell out the additional $4500 for the diesel engine next time, or maybe there will eventually be a hybrid option.

The handling is much improved over the 2005-2010 Grand Cherokee -- I can take highway on- and off- ramps much faster in the 2014 GC. However, the handling is not nearly as good as our 2013 Nissan Altima. It's a trade-off that I believe is worth it for the high ground clearance to drive over snow and obstacles. Plus the ride is much better in the GC than the Altima.

This is not a very big complaint, but there are not many storage compartments in the Grand Cherokee. The smaller Cherokee has more compartments, like on the dashboard and under the front passenger seat. However, the Grand Cherokee doesn't need them as much. I can fit a large laptop underneath my GC driver seat. Plus there is room to store jumper cables and a small fire extingusher under the rear load floor by the spare tire.

This is also a minor complaint since the Grand Cherokee has much easier to use controls than most vehicle with this many features. However, it would be nice if I could sync the left and right interior temperatures with a dedicated button instead of having to go to the climate screen on the touchscreen. I still really like the knobs for volume control, radio tuning, and HVAC fan speed. Plus I like the dedicated up and down arrow buttons for interior temperature. Also, I play a lot of music from an SD card, but every time I turn the radio on, it defaults to the USB input instead of the SD, even though the last music played was from the SD card.

These are also minor complaints, but a CD player was a $200 option that I opted out of. I hear it may be slightly more expensive now, but it would have been nice to have a CD player occasionally. I can always buy a portable one for $20 and plug it into the auxiliary input. Also, when I ordered the vehicle, a DVD player and screen for rear seat passengers was not an option. A Blu-Ray player was released later, but it was planned to be a very high cost option. Lastly, I purchased my vehicle nav-ready, meaning the dealer can activate the navigation system any time I decide to opt for it. However, it was a $400 option, so I bought a separate GPS for $100 from an electronics store.

I wasn't sure where to categorize this, but the off-road capability of the Jeep is amazing. It is freeing to know that I will never get stuck anywhere. Even in traffic -- just to know I could easily drive over the curb and through the median is priceless.

Overall I'm very happy with our 2014 Grand Cherokee. Next time I would consider opting for the diesel due to its higher fuel economy, especially if I start towing things more often.

Thanks for the review. I'm considering the 2015 Grand Cherokee instead of a used BMW X5 or Audi A6 quattro. My wife needs the heated steering wheels these vehicles have.

I ran the diesel vs. regular gas cost and allowed for 15k miles per year, and If the EPA estimates are correct in NY state the fuel cost is virtually identical. The issue is Torque and increased towing capacity vs. the extra 4500$ 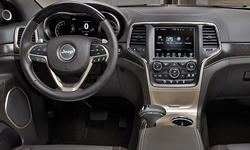