A member in California, United States

I have never owned a Kia before. This was my first Kia. I genuinely liked almost everything about the vehicle, until I saw the mpg I was getting. Consistently 3-5 mpg less than advertised. Would not have purchased if I knew this. Want to get rid of this car for that reason alone. Buyer Beware!

Many people probably decided on a Kia, and specifically a Sportage over other makes and models because of the advertised fuel economy numbers. Since day one, this vehicle ALWAYS, I want to stress ALWAYS, underachieves advertised mpg numbers. Took 2 round trips that were 360 miles one way, ALL highway, and best mpg were 26.2. That is 6 mpg LESS than advertised, and even with new EPA ratings, still 4 less. When driving a combination of 1/2 highway, 1/2 suburbs, attain 21-23 mpg which is less than "combined" mpg rating. Haven't driven an entire tank of city driving, but after measuring MPG for mostly suburb driving, get 17-19 mpg which is 3-5 mpg less than advertised city rating. Horrible.

Didn't let the dealership hoodwink me, but they definitely tried to misstate things and do circles with inaccurate math. But I guess that is no different than other dealerships in general always trying to twist truth of numbers.

I'm just really ticked off that the fuel economy is nowhere CLOSE to what was advertised. Want to return this vehicle and get a vehicle from a different Company. For anyone else affected by the fuel economy, there is a "compensation program" that uses low estimates for every facet of calculation, so they want to pay you about 1/5 of what you really should receive for fuel compensation. Just despicable of KIA. Will never buy one again, and forewarn others. This is a really dirty practice done to boost sales over other companies. Fuel economy is completely unachievable. It is fraudulent advertising. Never KIA again.

Don't buy because the fuel economy is much lower than advertised. Period DOT.

More About the Sportage 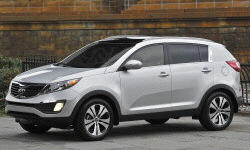 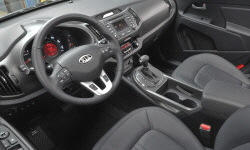