Had a 2013 Ford Fusion S. Very enjoyable car to drive, smooth, German sedan feel. Switched jobs, had to travel major back road in heavy traffic, too frustrating with that car, which wanted to carve up those back road curves and hills, but couldn't, due to the traffic. This sits up high, doesn't beg to be driven, although the suspension is firm enough, and the motor has enough to do so, if the chance presents itself. Went to dealer looking at Optima, which I had previously driven before buying Fusion. That Optima surprised me, didn't know much about Kias, except it oversteered a lit. Otherwise, I would have considerd buying one. New place I work, a lot of people drive Kias, so I looked at Optima again. Steering improved, but still just slightly vague. Not a deal breaker. Also, sits up higher than Fusion, slight body roll, but, again, not a deal breaker. Likable car. While waiting for salesman to come back from finance manager's office, noticed Sportage in showroom, sat in, saw price same as Optima. Drove, liked better, bought. Still like Optimas, wish I could afford two vehicles.

Stereo very intuitive to operate, very simple. Ford had SYNCH, more of a learning curve, although, when I learned it, I liked it. Stereo would not come on occassionally, but minor. This doesn't have UVO, equivalent to SYNCH, which comes standard in Ford, but optional on Kia, but has streaming Bluetooth audio, which I use a lot. Easy to pair phone with. Speedometer, gauges simple, and straight forward. Nice sitting up high, feels like a blend of a car and a little truck, Cool looking at other suvs, and being looked at. Kia owners tend to park next to you, and vice versa, as well as Hyundais, the mechanical twin of the Kia. Red color on stereo, and around cup holders cool.

More About the Sportage 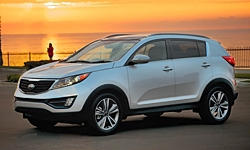 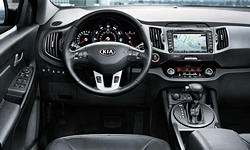