2013 Lexus ES Pros and Cons at TrueDelta: A Lexus Hybrid Sedan; Why Should Anyone Drive Anything Else? by Doobster6

I got out of a very nice BMW E60 5-series and got into this instead, and I don't miss the Bimmer one bit!! I went from owning the most expensive to own and operate non-exotic brand of car there is to the brand having the lowest operating costs, and without sacrificing one iota of driving satisfaction!!!

I stumbled into this Lexus hybrid quite by accident. Yes, an article at 'Yourmechanic.com' had confirmed both my worst suspicions about used BMW ownership and also that Toyota brands are their exact opposite. And so yes, I was shopping Lexus, but I had my eyes looking out for their GS350 AWD model. But then I found a 2013 ES300h hybrid with only 19k miles on it and after driving the two models back-to-back for over a week, I settled on the hybrid instead. Despite its age, the Lexus dealership was even offering it as a L-certified car with a 2-year B2B warranty!! And during November of 2019 Australia and California were both on fire and Venice was underwater, so this tilted my decision in favor of the car that would burn less fossil fuels. After now owning and driving the car for three months I can say that I haven't regretted the decision for one minute.
Fistly, it's a Toyota brand, and so that means it's among the most reliable and durable cars on the road today. Even after my first two years of ownership are up I won't be expecting to be punished with unexpected and expensive repairs and maintenance like I experienced with my BMW. And the hybrid models, of which Toyota has now sold more than 14 million over twenty-two years worldwide, have proven even more reliable and cheap to operate than their gasoline-engined cousins. The cars have a small 2.5l gas engine which is stressed far less in this car because a potent little electric motor helps it out all the time. Electric motors are WAY more reliable than gas engines, which have actually gotten VERY good over the last decade. So here's a model with two HUGELY reliable power-plants.
Also, the car has no transmission!! Automatic transmissions are very expensive to repair and/or replace and as they'grown more complicated over time the ikelihood of expensive failures after 100k miles are quite high. The engines might last forever but then there's the tranny waiting to bite you for at least a $4,000 rebuild. The Toyota hybrids instead have a single planetary gearset that they use very cleverly as a power-split device. It's a relatively uncomplicated and robust lilttle device that so far has proven highly reliable and trouble-free. The cars do have a honkin' Power Control Unit packed with voltage inverters, converters and computers to manage the whole car but those too have proven renarkably trouble free over the millions of cars sold so far, likely benefitting from Toyota's penchant for robust designs and defect-free manufacturing. The other big ticket item would be their hybrid battery pack. Even here, Toyota have stuck with NiMHi technology instead of the more power-dense (but sometimes troublesome) LiIo technology. Toyota warrants these now for 10 years or 150k miles which means that 99.5% will make it least this far, 75% will go perhaps to 200k miles and 50% to 250k miles, etc.!! In fact many Pius owners have already logged over 250k miles on their Prius Uber-cars and their original batteries are still holding chrges within factory specs!

But most importantly for an ex-BMW/European car owner is the pleasant surprise I got behind the wheel. The car's combination of handling and road comfort surpass the E60 BMW 5-series it replaced. Yup, it took some years but Toyota finally caught up with BMW in the chassis dynamics department, at least within the limits most drivers push their cars to 99.99% of the time. And this car absolutely gets-up-and-goes when you tromp on it. That powerful electric motor combines with the littler gas engine and produce startlingly quick acceleration! And yet when you drive for mileage you can see well beyond 40 mpg as I already have.
The interior is a thing of beaty, emphasizing luxury over Teutonis sterility that makes it a far more inviting place to live, and front and rear seat occupants will find even more room than the 5-series provided. Back-seat leg room is almost limousine-like! I also like the exterior which has great character lines without looking garrish.

So here's a luxury car with the industry's best reliability and durablity ratings, handles as good as a BMW 5-series, rides even better, can scoot along quite nicely when desired or deliver 40+ mpg when not, and has great technology (although not Apple Carplay in 2013). I'M SOLD now on Lexus and can't imagine ever wanting or needing to switch brands. I can't imagine why these cars wouldn't satisfy all but the most hardened of enthusiast/muscle car owners. For the other 95% of us, it might well be the perfect car!!

i think the GS has a hybrid version as well not just the ES. jeremely clarkson drove a GS300H or something of that sort it was a GS with a hybrid and he said it was a brilliant car. I agree with the majority of the review Lexus is closing in on the driving dynamics of the germans.

More About the ES 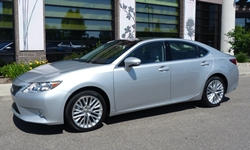 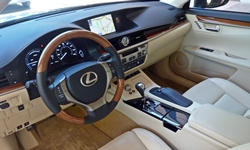