Mark Levinson is pretty good but I think not as good as the H/K rigs in the comparable 3 series... Nav system is easy to use. Wish my year had the Nav traffic and Bluetooth audio streaming but that update was made in 2011. Also, noticed in the 2012 loaner that the HD nav system was suspiciously slower than my DVD based one.

Strong resale value. Good brand image, I live/work in Beverly Hills and still holds it's own against European rivals for much less. However, some brand snobs will throw their nose. Eh, who cares.

Cheaper than it's competitors for maintenance and repairs. Watch out for the cost of the tires though; A set will easily set you back $800, which is often times much more than the European competitors. Oil changes can be done at independent shops for around $30-40 which is around the same for the Europeans.. In the long run, money will be saved.

Stylish car that garners sometimes a little more attention than I'd like... *ahem* cops. Reads more expensive than it actually is.

Initial acceleration leaves a bit to be desired but in everyday driving is pretty decent. Went from an Acura TSX to this car and noticed the instant lack of torque, but is definitely willing to pull strong in the 60-80 range.

Wish it got better fuel economy for such a small car and engine... Sticker is 21/29, I'm averaging 27MPG (computer read); avg on hwy is about 33-34 mpg while city is about 19-23mpg. Engine variety would help, a 4 cyl + turbo or something, but toyota/lexus isn't exactly known for that.

Man, I understand that Lexus is competing against the Europeans but seriously, trying to act particularly sporty is not cool, especially when this car reads more luxury than sport. The first set of Bridgestone Potenzas wore off around 25k and had to replace with Hankook Ventus tires which are a bit louder but handle better. Those set me back $800-900 all in.

Yeah, the back is small but still big enough to handle for the poor rear seat passengers.

More About the IS 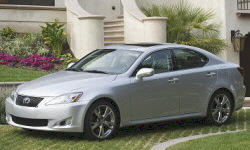 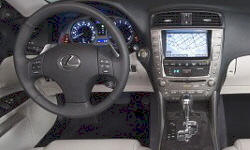