2001 Lexus LS Pros and Cons at TrueDelta: Fantastic car - The best I've ever had (I started driving in 1972) by glynrb

It looks a bit frog eyed at first, but a couple of years down the line I've grown to like the looks.

Old fashioned - Wood and leather everywhere. I love it!

I have lost count of the number of times I've tried to start the engine, only to find it's already running. As to acceleration, I recently drove a 1934 Schools Class 4-4-0 steam locomotive weighing 100 tons. When you open up one of these, it really does feel as though there is a huge force that will overcome anything in your path. the Lexus feels just the same! Most of the time I simply cruise along (in the Lexus, not the steam loco), but if I feel like being a hooligan, I slip it into 4th gear, floor the throttle and simply enjoy.

In United Kingdom (Imperial) gallons and miles, over the last 60,000 miles I have averaged 24.6mpg. In town it falls to about 15mpg and on a long run at 85mph (normal cruising speed on UK motorways despite 70mph limit) it returns 27.5mpg

Handling is a bit like that for the steam engine - It goes beautifully in a straight line. To be fair, it doesn't handle badly, especially when you look at the sheer bulk of the vehicle. To me the sport setting is too hard unless I am in a real hurry, so I stick with the normal setting. One thing to note is that the "high" setting proved very useful this year when driving down a river in Oxfordshire. The river is normally a road, but the continuous heavy rain made this particular road suitable only for 4 x 4's and Lexus LS430's

I haven't tested the car's crash resistance, but on the few occasions I've had to seriously hit the brakes, they've done the job wonderfully.

Remember the train? Well the ride is a bit better than that on an inter-city UK train on smooth welded track. In other words it's about as good as you'll get in any form of transport - That includes first class travel in a modern airliner

The engine is silent at tickover, you could easily kid someone that it's a hybrid. At 85 mph the quieter bits of Beethoven's 9th and Carmina Burana need to be turned up ever so slightly - If I turn the sound system off my wife finds it very hard to stay awake on the motorway - That's when i'm driving, not her.

My previous car was a Lexus GS300. That went through front tyres in about 10,000 miles of mainly gentle driving. I changed the tyres on the LS430 when i bought it at 98,000 miles. I've just had a service at 160,000 miles and the front tyres have about 5,000 miles wear left on them. The rear ones don't seem to have worn at all. By the way, the tyres that were on the car when i bought it were a bit noisy on poor surfaces. I replaced them with Goodyear tyres with a good noise rating, and it made a big difference

I travel a lot and I often need to work in the car. The seats are wonderfully comfortable and supportive of my bad back. I had a Mercedes S Class for about 7 years, and the seats in that were excellent, but although they were supportive and comfortable, they weren't "cosy". In the LS 430 I feel as though I have a large lounge full of really expensive arm chairs.

See what I say about front seat room - It really doesn't get better than this.

I am built a bit like a gorilla - Long arms and body, short legs. This means that I have never found a car where I could get a perfectly comfortable driving position AND be able to see the top part of the speedometer. The LS is better than most, but I still have to bow my head a little to see whether I am in the licence losing zone or just inside the speed range that the UK police allow (85mph is OK, 87mph is BAD)

There's plenty of room for everything

It's vast - Not quite as big as the Mercedes 560SEL, but amply big enough. The rear seat recline and have the vibro massage feature. Passengers love it. The seats are as comfortable as the front ones

The boot (trunk) will take all the luggage needed for four adults to go on holiday (vacation). Alternatively, on business it will take six computers, a projector and screen and luggage for two people for a week.

The LS430 is a phenominal car. If you purchase it at 3years old or later it's fantastic value for money.

More About the LS 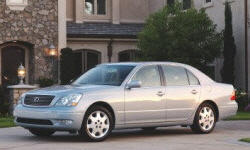 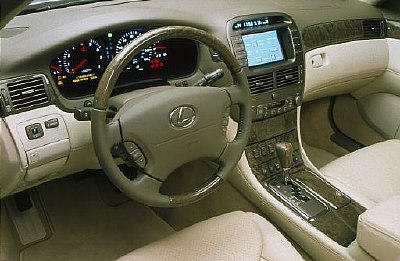