2009 Mazda RX-8 Pros and Cons at TrueDelta: RX-8 - Handles like a Lotus, but seats four! by grandestmarquis

Mazda is known as the zoom-zoom company for a reason. They make mainstream sedans, hatchbacks and crossovers that are genuinely fun to drive. What happens when they decide to forget about the mainstream and design a serious sports car? There's the MX-5 Miata and this, the RX-8. With a low curb weight and an impeccably tuned suspension, the RX-8 is the definition of nimble. The placement of its tiny but powerful rotary engine - more on that later - means it is technically a mid-engined car, making it a very neutral and responsive handler. Though it has an electric assist steering system, which is the kiss of death in terms of steering feedback for many other models, Mazda managed to tune the setup in such a way that you know exactly what the front wheels are up to at all times. Overall, the RX-8 can hold its own in terms of handling against nearly any model short of an exotic.

V8? V6? inline-four? Nope, forget about cylinders, the RX-8 is one of the few cars on the road with a rotary engine. Able to do more with less, the RX-8's mill displaces just 1.3 liters yet produces 232 horsepower. That does come at a stratospheric 8,500 rpm - redline is a racecar-like 8,000 rpm - so you need to be willing to wind the engine out for best performance. Give it the stick, and the RX-8 can hit 60 mph in a respectable 6 seconds. Torque, at 159 lb-ft at 5,500 rpm, is nothing to write home about. However, there isn't much mass to move around, and as long as you keep the RX-8 in the right gear - easy to do with the smooth-shifting, short-throw six-speed manual - you'll be up to speed in no time.

Given its rev-happy engine, Mazda set up the instrument panel perfectly by putting an oversized tachometer front and center with an easy-to-read inset digital speedometer. It facilities spirited driving and also signals that this is most certainly a driver's car. Seating position, it should be noted, is excellent, although some might be bothered by the lack of reach adjustment on the steering wheel. The wheel itself, a small diamater, three-spoke unit, falls easily to hand and has strategically-placed, user-friendly audio and cruise control buttons. On a side note, the inset triangular metal trim in the headrests - modeled after the shape of the rotary engine - are a very cool touch.

Given the RX-8's compact dimensions, you wouldn't expect rear seat space to be a strength. But thanks to clever packaging and a subtly high roofline, there is actually space for real adults in back, provided those up front are short or move their seats up somewhat. With a pair of pickup-like rear-opening "half" rear doors, ingress and egress for rear seat passengers is a snap. For those who want a sports car but have children or need to transport a few friends occassionally, the RX-8 fits the bill nicely.

Beauty is in the eye of the beholder, but for some, the RX-8 is a model is subtle aggression. The flared fenders and narrowed headlights signal the car's sporting intentions, while the "smiley face" grille that afflicts other Mazdas of this vintage is mercifully absent here. Many of the arguably less successful stylistic elements of the series one RX-8 - the cheesy vertical fender vents and triangular, rotary-inspired front adn rear trim pieces - have been eliminated or reworked, making for a cleaner design. Tasty 18-inch wheels and a handsome rear lip spoiler round out the package.

One of the big downsides of the rotary is truly horrendous fuel economy. When the RX-8 first came out in the early 2000s, its mileage ratings of 16/22 city/highway mpg (stick shift) were just barely acceptable, but there days, with many crossovers hitting more than 30 mpg on the highway, those figures are truly atrocious, especially given respectable but certainly not neck-snapping power. Futhermore, it takes premium. If you're using the RX-8 as it commuter, fuel costs will add up quickly. In my predominantly around-town driving, I typically average between 16-17 mpg. My highest recorded average was 20 mpg on a highway trip at speeds around 75 mph.

This is an old-fashioned sports car - instead of using adaptive dampers or other technogical aids that provide crisp handling AND a compliant ride, the RX-8 instead owes its handling ability in part to a rather firmly-tuned suspension. If roads in your area are in poor repair, prepair for bumpy travels. It's worth it if you prioritize a thrilling driving experience, but if you're looking to float down the road, look elsewhere. Also, prolonged exposure to potholes can lead to interior rattles - that's true for any car, but especially so for the RX-8.

I haven't had any problems with my RX-8 yet (knock on wood - 36,000 miles and counting), but it certainly has developed a reputation for premature engine failure. Early-production series one models seem to be particularly at risk. Conversely, Mazda supposedly fixed many of the problems by the time it rolled out the series two (2009 and later) models like mine - something to think about if you're seriously considering an RX-8. A well-known but worth repeating fact is that the RX-8 requires its owner to be very attentive to its oil level, as the rotary burns a not incosiderable amount of oil during the course of normal operation. This hasn't bothered me, as I'm not troubled by spending five minutes every few weeks to check the oil, but those who don't have the time or the interest should look elsewhere. I've found that my RX-8 needs two quarts of oil roughly every 1,500 miles.

Unfortunately, Mazda dealers seem to see dollar signs when they look at the RX-8. Perhaps because of the unusual engine design, they think that they can charge outrageous sums for regular maintence. They often also try to prey on consumer ignorance by suggesting uneccessary maintence. Imagine my surprise when they recommended changing the power steering fluid (as it uses an electric steering system, the RX-8 does not have steering fluid!). The good news is that things get much more affordable if you use an indie mechanic or decide to work on the RX-8 yourself. Even so, maintence costs are a bit higher than a comparable sports car like a Mustang or a BR-Z.

Though it has a Bose audio system (available on upper trim-level models), my RX-8's sound quality is middling at best. Very little bass clarity, and overall it sounds a bit flat and uninspired. Tire, wind and engine noise also make it bit hard to hear the tunes at higher speeds. Best to just turn off the stereo and listen the rotary sing!

More About the RX-8 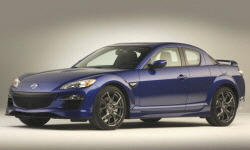 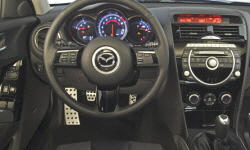