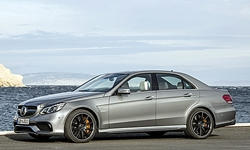 We have a 2008 Acura TSX with the six-speed manual, and traffic in our city has gotten to the point where it's no longer enjoyable to commute with a stick shift. We're thinking of moving upmarket for a corporate-lease return CPO 2014 E350 with less than 20,000 miles for what appears to be a pretty good price.

This might be our first actual luxury car (instead of luxury-lite as is the Acura). Mercedes CPO warranty is pretty good. But it's only good for a year beyond the expiration of the factory warranty. A question: is reliability and maintenance of this car as nightmarish as we fear? Are we committing ourselves to "luxury repair" prices even though we might be able to get the vehicle for 1/2 of its original sticker?

Any thoughts and impressions would be appreciated.

It's a Mercedes so any repair will cost you. You should invest in an aftermarket warranty for a couple extra years. They are not terribly expensive and will cover most issues. With that said I can say these cars are bullet proof. I wouldn't worry too much. Just do as much investigation as you can on the car and take care of the services as necessary. I own a 550 and it's a beast. The 350 is basically the same with far less horsepower. Even with this v8 and horrible traffic I can get 27 plus mpg. I love this car. Good luck.

I agree with Member5185 on all points. Make sure the car checks out, and although it may not have the absolute reliability of an Acura, I have been pleasantly surprised at how little work I've required on my '06 E-350 with 118,000 miles. MOST IMPORTANT- BEFORE YOU BUY, CHECK WITH FRIENDS AND THOSE WHOM YOU TRUST TO FIND A GOOD MERCEDES MECHANIC-not necessarily the dealership. The difference in cost is astounding. Even though Mercedes parts are still expensive, if the labor cost is reasonable, its not so bad.
I've driven my son's TL type S and it is fun, but nothing rides like a Mercedes, I'm sure you'll enjoy it.

Thanks to you both. We bought the Acura thinking it was an upscale Honda and should be pretty reliable, but I've already in the last two years (post CPO warranty, of course) replaced the drive axle and the clutch (thanks to the 30-mile bumper-to-bumper commute every day). All this with only 67,000 miles on the car. So reliability is not "absolute" at least for this particular Acura.

We are fortunate to have some top-notch independent repair shops close by. I plan to give them a call and see what their recommendations are as well. But I appreciate these comments!

Note that in some years the E350 came in a sport and a luxury version. The big difference was the suspension and (I believe) the front end styling. You may wish to drive both to see which one you prefer. If I remember correctly, in 2014 the sport came with the grill that has a bar across it and the luxury had the tall chrome traditional grill. You may wish to confirm with the dealer who is selling the car you are looking at.

Is a Mercedes an expensive car to own? No two ways about it, yes. Service is more expensive than an Acura, and repairs can be in the ludicrous thousands. I do not consider a Mercedes a "reliable" car, and we have had a great many of them. I grew up on them when they were good, and still have a '72 sedan, but my wife's family insists on buying them since they went to pot, and we deal with it. For instance, my mother in law's 2004 CLK had the key recognition system devour itself at around 15,000 miles and a year old. It was under warranty but that is thousands if you have to fix it. Thing is that her 2011 C Class did the exact same thing at around 7,000 miles. Our 2007 C Class had the transmission lunch itself entirely at about 45,000 miles. Our current 2015 E Class wagon just got back from having its heater box replaced because it apparently split in half and the blower motor was rattling around in there. That was at 16,000 miles. All of this stuff was under warranty, but if you are looking at a warranty running out, it can be a problem, and as for after market warranties, not all dealers take them and be sure that whatever you get covers you for OEM parts because that can be a problem.

In my opinion, you might want to look at something else, maybe not German.

I've owned a 2007 ES 350 since new. Now has 59K trouble-free miles. Very comfortable, particularly for long distance travel. With premium gas on long trips, avg between 33 and 35 mpg. Around town avg around 21 mph.

Not a sports car, but handles well enough. Would recommend purchase.

Thanks to you all for the valuable advice. I think we may end up not pulling the trigger on this one. I think we may not be "German car" people, odd as that may sound. I don't know if I am ready to commit to the care and feeding of a luxury vehicle of any kind, much less an M-B. Perhaps someday, but not yet, I don't think.

In any event, the perspectives provided here were really great. Much appreciated!

2014 E250 Bluetec 4-matic (sport package, not luxury package) owner here, 19K miles currently. To directly answer your question, the E350 is unlikely to be as reliable as an Acura, but having said that Acura has recently been shown to be not so reliable.

The thing about Mercedes products (I've owned many many of them) is that they are mostly designed to be maintained. They design most of the mechanical parts to be serviced rather than just replaced, and (especially with diesel models) the engineering of them are top notch. The W212 (internal designation) is a very robust vehicle overall. M-B designed them much in the vein of the earlier cars, even mimicking the interior design of the famous W124 (1986-1995) in some respects.

I know Consumer Reports may cause some eye-rolls around enthusiast corners, but the E250 Bluetec was the second highest rated vehicle they have evaluated OF ALL TIME, only exceeded by the Tesla Model S. Buy their auto issue from this year and check it out for yourself: Look carefully at the reliability matrix towards the back. You'll see the 2014-2015 models are almost all red (good) with no major system issues listed. The editors actually did a video discussion review of the car, worth the watch... more than half of the video is just on the E250. https://www.youtube.com/watch?v=AQcvUmZ8x3k

Personally, I chose to go with MB-Tex over leather, skipped the fancy radar cruise control, and skipped many of the crazy electronics. I do have NAV, which I think is essential, and a panoramic sunroof. As is noted in another review, my car also had an issue early on with the heater box under the dash. There was a TSB on them, it's not a complex fix. As others have suggested, buy one with a service history, certified if possible, and if not at least buy one that is under factory warranty so that you can buy an extended warranty. My credit union will get my sale on a warranty, mostly because they incentivise them... I am able to buy a bumper-to-bumper extended warranty to 10years/140K miles for $2900.

Now, having said all of that... drive one. If you don't love it, esp compared to an Acura, I'll be shocked. They are so solid and reassuring on the road it's crazy. And the ride, even with the sport models, is second to none.