I absolutely love the power of the E55 AMG. The torque from a supercharged 8 cylinder is intoxicating. The fact that this car has the same, or oftentimes, better acceleration in a straight line than many exotic sports cars, and is a four door sedan is just amazing. The specs are 469hp, but in actuality it has 500hp. Mercedes couldn't have the same engine in an S class (read: more expensive) and have the same power, so they introduced the E55 with less horsepower. But, not really.

While subtle, I really like the exterior styling of the E55. I find it to be slightly aggressive with the wide tires, different body panels, and the fog lights. The quad exhaust helps too!

The atmosphere in the interior is nice. I like the Alcantara headliner, the mood lighting in the footwells, the puddle lights, etc. It is just a nice ambience to be in. Plenty of room for a mid sized sedan, not to mention a huge trunk.

The W211 E class is just a mess of problems waiting to happen. Probably the biggest is the tendency of the fuel tank and two fuel senders (underneath the back seat, by the way) to leak with no fix other than to replace them at a high cost (over $3,500). The fuel sender leak happens to be right around some electrical connections as well, so it is a wonder there haven't been any notable fire incidents. This is a known issue and there is an NTSB ongoing investigation (PE12001, which has been upgraded to the next level of action) because of the high number of vehicles affected. The fact that Mercedes doesn't own up to this issue after several iterations of re-engineered parts and continued failures is the main reason I will never buy another Mercedes. I have had to have this repair done, so I speak from experience.

The second major issue that owners of the W211 can expect to have is the SBC brake system. This was implemented on the '03 - '06 W211 and it was changed on subsequent years in 2007. The SBC unit, pressure reservoir, and the other parts of the brake system can alert you to a fault and minutes later leave you without brakes. This is unacceptable. Mercedes did put out a 10 year unlimited mileage warranty on the SBC unit itself, but I'll give you one guess as to when the fault will happen! If the pressure reservoir goes out, you won't even be able to get the car out of park, even just to get it in to neutral to get a tow. The brake sensors seem to be finicky and the brake switch as well. Knowing what I know now about the failed application of SBC, I'd never purchase an E class Mercedes between the years of 2003-2006. If I were to ever look in to purchasing a Mercedes again, I would do my homework on the types of systems in place. I have had to do this repair and others on the brakes, so I speak from experience.

The third major issue the W211's have is the airmatic system. A common fault is for the airmatic struts to leak, which requires replacement. One replacement cost is $1600. If you aren't under warranty, the bill could add up quickly if more than one goes out. The airmatic system is nice in principle, but in practice this is a common ailment. I had my left front go bad, so I speak from experience.

The W211's, and many other models of Mercedes, have two batteries. One main batter for starting, and an accessory battery for running convenience features, your brakes, etc. This is a definite source of trouble. When you have certain functions fail, the obvious place to look at a secondary battery isn't the first thing that comes to mind. A secondary battery that is slightly low on voltage can start to create havoc in your electronics. I have faced this a number of times, and actually, it is now one of the first things I check when something odd is occurring.

More About the E-Class 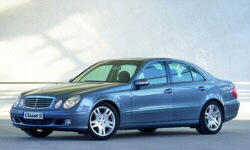 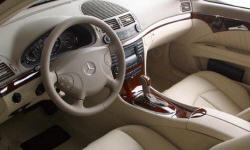