2002 Mercedes-Benz SL Pros and Cons at TrueDelta: a tank disguised as a sleek sports car by Abdoozy

The r129 Benz is the ideal sports car for fat middle aged men like me who appreciate fine German automobiles, want wind in their hair, and are willing to put up with the hassles that come with ownership of a beautiful diva.

Gorgeous, especially from the rear quarter view. With the hardtop affixed it's a sleek, sporty two door coupe. With the top down, it's the quintessential roadster.

Everything falls readily to hand; the seats are broad and comfortable, if lacking a bit in lumbar support. The dash is easily readable and the controls are all right where you want them.

It's a heavy car, but the 305hp V8 is more than capable of getting the owner in big trouble with the local authorities.

Safe and controlled. Easy to drive fast down twisty roads. It won't be confused with a Miata -- it's a heavy car and the weight balance results in modest and predictable under steer, but you can turn off the ESP and have fun breaking the tires loose and sliding around corners.

It's a tank. A tank with really excellent brakes. I scared more passengers stopping than accelerating.

room for improvement here. Although the r129 wasn't a product of the doomed Chrysler merger, I sense that my 02 model suffered from some of the lack of attention to detail that doomed other early-millennium Benzes like the S class. I don't like being left by the side of the road and this car did so twice; once when an undetected oil leak took out the crankshaft position sensor, shutting down the car in the fast lane of an interstate just a few hundred feet short of a very busy and long interstate bridge. The other time a mystery battery drain left the car disabled, and when the Mercedes local dealership was dispatched to restart the car, the jump process fried the stereo head (tech comment: "it wasn't supposed to do that", but the dealer refused to do anything about it, and at that point I wasnt using cassettes anyway, so the head was replaced with something more modern). In very hot weather, the convertible top would just decide it didn't want to open; the latches would release, the top would start to retract and just..stop. Wouldn't complete the cycle until it cooled down. The trunk lid finisher -- a red reflective lens that contains the third brake light -- would never stay sealed, and water would accumulate inside the trunk lid, safely stored therein until the trunk was opened, at which point the water would discharge from a point near the hinges into the trunk itself (and on whatever you had in the trunk).

Not great. I averaged about 16mpg in around town driving, about 22 on the freeways. Best mileage observed was in Wyoming, 24.5, coming downhill eastbound from the Grand Tetons. that said, people shouldn't buy this car expecting a Miata, in any way other than Two Doors and a Convertible Top.

This car is very sensitive to tread patterns. When I bought it it was shod with Goodyear Eagle GTs and had a nasty tendency to drift to the left into oncoming traffic, despite repeated efforts to correct the geometry via alignment. I changed the tires for Continental Extreme Contact DWS and the port-side drift changed to starboard; not as drastic, but still annoying. I was never able to drive the car in a straight path with my hands off the wheel.

Abysmal. Nothing but complaints when I put people back there.

Having owned this car 4 years, I probably wouldn't buy another one, but I wouldn't discourage anyone from doing so. Just go in with your eyes and wallet open.

More About the SL 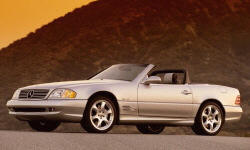 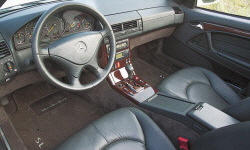