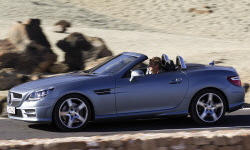 Hi, I love this little convertible and am interested in a used. Any year 2000-2017, manual transmission.

Does anyone find this a reliable car?

Hi, neither TrueDelta nor Consumer Reports has reliability data for the SLK. Since it is a Mercedes, it will have much higher repair costs than the average car. I suggest either getting a CPO newer SLK with a warranty from a dealer or get a Miata 2016 or newer.

Lectrofuel is correct, this car is sold in such a small volume it has no reliablity ratings you can trust anywhere. However, the SLK is related to the S class (S in SLK) so there is some linkage to that to the sedan. It can give you an idea on reliablity (powertrain, electronics, brakes in particular).

From 2012 to 2016 Consumer Reports does have something on relablity for the S class.

Again, this gives you vague reference. Being a two door, body integrity is going to suffer (and score lower) just by the design. The mechanical parts above probably will hold true for it as well. Best of luck.

Actually, the SLK was more related to the C-Class, IIRC. The SL was more of an S-Class.

I would look at what engine comes with the SLK, and then look at how reliable that engine is in other cars. For example, they may use the same engine as the previous generation C-Class. The later you get into the model year, the more reliable it should be. I'd look at SLK/Mercedes forums.

Lectrofuel is correct, the nomeclature I used apparently was only adopted in 2017 when the SLK was changed to the SLC (SL means apparentlySportlich Leicht (German for "Sport Lightweight")). Sorry for the wrong information.

So best years are 2011 and 2014, and 2005 is not bad either and just a little worse is 2008. After that you probably take your chances. Again, this is the C class which Lectrofuel wisely corrected me on.