2010 Mitsubishi Lancer Pros and Cons at TrueDelta: Why not this car? by ninjacoco

If you don't like having a surprising amount of fun in an unexpected car, this is not the car for you. If you're averse to decent handling on twisty roads and a torquey little 2.4L, look elsewhere. If you only need to tote three dead bodies because four--four's your limit, man--you'll be most unamused with the gargantuan amount of space in this car.

"No, it's not an Evo." The GTS package fills out the tall beltlines of this car extremely well, with large wheels that fill the negative space on the side and a wing and aero package that fills out the shape quite well. (Bonus: that wing blocks tailgating headlamps quite well.) The '09+ taillights look better than the '08's pinky ones, plus the '10 avoids the silly black front-goatee of the later models. Yes, it's all show, little go, but who cares? It looks good without being too rice-tacular.

The Lancer has what a lot of other manufacturers fail to think about: ease of use. Big, tactile buttons. Simple inputs and commands. I may sound like an old fart, but when it comes to in-car tech, I just expect things to be easy to find, somewhat ergodynamic, and work. Buttons on the steering wheel are for the right functions (although I could do without Bluetooth for the phone) and make adjusting the radio easy without even having to look at it. You gave me an interior option without tiny buttons or a huge screen. Thanks, Mitsubishi. Lines are simple and clean. The plastic scratches easily, but meh.

The GTS package handles so ridiculously well out of the box. I've considered putting on a bigger rear swaybar, but meh. I can manhandle it into some nice lift-off tail waggles as it is, which is fun. It's very predictable both on the road and on the track. Deviating slightly from the stock alignment settings helps considerably with turn-in/less understeer as well. (More toe!)

This car has been a track and autocross beast from day 1 because hey, free car. It's seen many long trips, including an Austin to Seattle loop via as many scenic roads we could fit in. And it just doesn't break. Maintain it well and it will run like a charm.

The trunk holds approximately six dead bodies. (I haven't tested this out, but it's very large for a small car.)

18" tires are EXPENSIVE! The OEM Dunlops that came with it are pretty meh: a bad compromise between a summer tire that wears out fast and an all-season that's not very grippy. They had the worst characteristics of both. Also, no matter what you get, it'll be expensive and you may have to deviate from the stock 215R18/40 size to get the tires you want.

My metallic red is nice, but I really would have loved to see more bright colors on this car. Perhaps a bright red? Paint could be a bit thicker, too.

The 10-year, 100,000-mile powertrain warranty rules. I didn't need to use it, but it was good to know that was there just in case. That being said, CVT maintenance will eat your lunch. The fluid itself is expensive, and shop time on top of that is usually pretty pricey. Furthermore, it's hard to find spare parts for this car because too few people bought them in my area. I needed a new wheel and can't find one to save my life.

These seats desperately need more lumbar support. They're okay in short distances, but I really want the Recaros from the Evo a few hours in. Stronger side bolsters would be nice for hoon duty, too.

It's not as great as you'd expect from an econobox. If this is your biggest concern, this is not the car for you.

Visibility could be better, particularly over the mirrors and over the trunk.

This car will outlive cockroaches, Twinkies and all the other survivors of the apocalypse if you take care of it well.

168 hp is adequate. Just enough. There is very little torque steer, and it's a torquey enough motor to be fun out of the box. I enjoy the fact that Mitsubishi lets their CVT be a CVT--no fake gear shifting unless you put it into paddle shifter mode ("Sport"). It revs up a little faster in Sport mode, but doesn't downshift quick enough to really use the paddles like a regular dual-clutch or manual gearbox. You can't downshift 'til you're almost done with a corner!

I learned this when I went through Rental Car Roulette a while ago: the Mitsubishi stock unit's audio is better sounding than most compact sedans. Good range of sound, easy to use controls, plus an AUX jack for your own music.

As long as you can find a well-maintained example, go for it. It's a great car, though if you're looking at 2010s, the previous owner's shenanigans (or lack thereof) can make or break you.

If your looking for a car to work on all the time, look for a Mitsubishi! If you want reliability, look elsewhere!

Let's say, hypothetically, that one was to cut the dead bodies into quarters? How many will fit in the trunk then (hypothetically)?


Great review! I always liked the looks of the Lancer, but stayed away because of Mitsubishi's poor reputation (deserved or not, I admit ignorance). I'm glad to hear it has treated you well.


How many miles do you have on the car? How is the interior holding up?

More About the Lancer 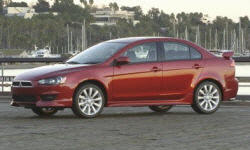 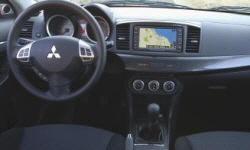