2004 Nissan 350Z Pros and Cons at TrueDelta: Rewarding for the committed enthusiast by future62

After driving a half dozen FWD sedans I wanted to have the sports car experience, and the 350Z delivered it. I learned that the realities of sports car ownership don't quite match the idealized perception of it. If you are an enthusiast who can commit the time and cost to tracking this car regularly, or for whom the inconvenience and road noise of the car is not a concern, it's definitely worth a look.

This car is powered by the engine that saved Nissan in its near perfect form. When you get into a rhythm with it, the motor answers to every beck and call immediately, and in my opinion sounds great doing it. It also has a very street friendly powerband in DE form, not requiring you to rev to the moon to get moving, but not shying away from redline pulls. This is my 3rd VQ equipped car, and the lineage is obvious- sometimes when I am cruising it sounds exactly like one of my old Maximas.

I was never really a fan of the Z's design, and I'm still not, but with a huge asterisk. When I was shopping for the Z, the only two examples I looked at were white. In white it looks gorgeous to me. Looks a lot more grown up and upscale, especially with that pearl effect. It has great classic sports car proportions and beautiful details like the blistered wheel arches. I still smile sometimes when I see it.

I bought mine with about 160,000 miles on it kind of as a toy as I didn't anticipate having a 400 mile a week commute. Through all that though it has been dead reliable. Here are the only issues I've had with it: - Clutch needed to be bled as pedal would sink to floor in hot weather (still operable though) - Replaced/upgraded brakes - Alignment was way out of whack and feathering front tires (common problem) - Driver's side window motor failed the day I bought it (fixed obviously, common problem, no issues since with OEM Nissan replacement) - Trunk latch and dampers were shot and needed to be replaced It starts up and runs like clockwork. I could see this car going another 100K miles in the hands of the right owner.

This car has a ton of mechanical grip, and its low center of gravity inspires a decent amount of confidence. Traction control gives you a good bit of leeway to play as well, though when it intervenes it can be pretty ham fisted and disorienting. Yes this thing shares a platform with an SUV, but at the end of the day it's definitely a sports car.

I have driven this car from NC to NYC and Miami. It eats up miles like nothing and is pretty comfortable for long trips, aside from one caveat which I will discuss at length in the negatives. Bolstering is good for spirited driving but not intrusive for just cruising. Space is tight though, so there's no room to take off a jacket while driving or anything like that.

I am very sensitive to noise, and this car has road noise in SPADES. The lack of a seat and decent enough insulation to block rear tire sound combined with big sporty tread/compound 245s = a lot of road noise. A LOT! I like to do audio upgrades and listen to music, but with this car it was pointless- just to hear the music, you have to crank it up above the thrum of the tires. And when it rains, forget about it. It sounds like you are in the rear wheelwells! The road noise is easily the worst thing about this car and it drove me nuts. I still have it along with a Civic and I don't even drive it anymore, largely because of this.

Like I said before, this thing shares a platform with everything from a big luxury sedan to an SUV. Because of that, it's pretty low on suspension travel and is tuned to work within that range of operation. What does that get you? Stiff springs and shocks. Combined with the 18" wheels and low profile tires, it can get pretty choppy over bad pavement. I live in NC which is far south of frost heave country, but when I drove up to NYC I was shocked by how many rattles the interior had, as well as how stiff and crashy the suspension was. This is definitely not a car for folks anywhere that snows or gets cold enough to eat up pavement- it's miserable in that environment.

This car's fuel economy shows how much the world has moved forward with regards to fuel management. My commute is pretty much 50/50 city/highway, and I get 19-22 MPG on average depending on weather and A/C usage. My best tanks were in the 26-27 MPG range on those long trips to NY/FL. For reference, a 335i makes more power and probably averages about 22-24 MPG in mixed driving and can get over 30 MPG no problem on the highway. When you drive ~25000 miles a year that definitely adds up.

Let's be frank- the interior in this car is CHEAP. The doors are just featureless slabs of plastic, and the center console is scratched to all hell. None of the controls have the quality damping or feel of something even as measly as my 09 Civic. The seats have held up OK though as has the leather on the steering wheel.

I am 5' 9" and not very big and this car has a decent driving position. Visibility forward is great, for the most part... but trying to parallel park this thing is a nightmare. This car is the same size as my wife's Rabbit length wise, but it's so much harder to park because you just can't see out of the back of it. Lane changes aren't as bad because it's short enough that you can pretty much squeeze in any space, and you sit pretty close to the rear of it so you have a good sense of clearance. But backing out of parking lot spots and parallel parking can be a bit nerve wrecking.

This thing's trunk is pretty useless, thanks to the omnipresent strut bar and behind-the-seat gloveboxes. Nissan fixed the design a bit with the 370Z, but I don't have that. A trip for two will pretty much fill up the trunk with luggage, and you have to be careful about what bags you buy. It's limited to maybe 2 or 3 carry on bags.

The Bose system in this car is not terrible. I did replace the OEM head unit with an aftermarket one with an aux input and it works well enough. The little 10" sub behind the driver seat extends down to about 40 Hz and then drops off rapidly. It's good enough for most music but if you like bass heavy stuff it will leave you wanting. There are custom enclosures for the trunk, but then I hope this won't be your only car or you get good at taking the box out when you have to carry something. All in all though it's a decent system. Decent enough anyway.

I know I mentioned driving position/visibility before but I thought this was worth noting- the 2003-2005 headlights are terrible, and the 2006+ headlights are phenomenal. Even the DEPO 06 imitations are an appreciable upgrade. 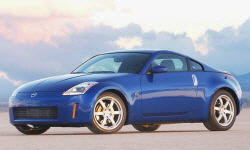 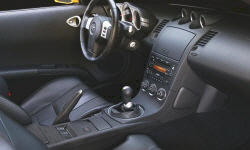