I have found this car to be reliable. It has a large cabin for a mid-sized car. The CVT incorporated in the drive train has taken a little to get use to. You do NOT feel it shifting. If you want economy and a smooth driving car, the Altima is a good choice. It's A/C is the "coldest" a/c I've had in a vehicle. If I drive it with a mind on getting the best fuel economy I can, it delivers. When I drive it easily and light on the pedal, it delivers 32++ mpg on the highway and 25-28 in the city. Again, driving easy and not hurriedly. It feels solid and is quiet too.

I am 6'3", weigh 235. Being a big guy, I find this car VERY comfortable. I use it in my work daily. I drive it multiple trips/day (there have been as many as 8-10 trips/day-from 2 miles up to 50 miles/each trip). So I am in/out of the car multiple times/day. It's very easy to enter and exit and is very roomy for a mid-sized car and also has a lot of rear leg room. The trunk is large as well and the back seat folds down making the useful trunk space all the more. I also like the console and having the iPod connection in the second storage area of the console-out of the way. Hip room of the front seat is very generous as well. Just yesterday I had a rear seat passenger who commented how much leg room they had in the back.

It took a little getting use to the CVT transmission. After having driven it for thousands of miles now, I have gotten use to it and now know how to get maximum fuel economy/mileage with it. The CVT is programmed/geared to use engine torque aiding the car to achieve it's max fuel economy. It is quick to take off from a stop light. On the highway, when you want to pass, it takes 1-2 seconds after pushing down the throttle pedal for the computer to re-adjust engine rpm and gear selection to ramp up power for passing. It's no race car (I own the 2.5L) but overall, it's a great package. I have found the 2010 Altima power train to be a very economical combination and found it delivers the best power and economy available in any car in it's class and price point. It has been reliable as well, other than having to replace the OEM battery at 38 months (I normally have to replace at 60-72 months in my other cars).

I own two other vehicles; a 2004 GMC Yukon and a 2010 Chevorlet Z06 Corvette. Those, in comparison to my 2010 Altima 2.5L Sedan, have better brake proportioning. The antilock works well in the Altima, but I think the front has more stopping force than the rear. I do not know if it's because of the CVT transmission or not, but when moderately braking I really feel the front of the car stopping more than the rear of the car. In my Yukon and Vette, I don't feel the stopping force in the front near as much as I do the Altima. However, it does stop good.

I have gotten use to the CVT transmission. This transmission is set up to use the engine torque to aid in fuel economy. When you take off from a stop light, you can feel the transmission change (no shifting felt) where the engine rpm is kept low (low rpm) and engine torque pushing the car more than horsepower moving the car. For maximum horsepower, the rpm's have to rise up above 3k rpm. When the rpm is kept low, the engine is not using as much fuel, thus increasing fuel economy. The CVT does a good job at utilizing the engine's torque at low speeds (city driving) to aide in maxing fuel economy. On the highway, it varies the gear ratio's without feeling it shift. You may observe at 70 mph the rpm at 2k rpm. When needing more power or climbing steep hills, you do not feel it shift, but will observe the rpm (tachometer) rising to meet demands for the situation. It you drive it easily, maintaining speed limits, and allow the car time to increase speed, it definitely maximizes fuel economy. It you had a heavy foot and and go zipping around, then you loose economy. But driven easily with a mind on economy, I get approx 32 mpg in this car on the highway and around 25-26 city. If I'm driving "in a hurray" so to speak, I lose about 5-6 mpg all around.

Quietness it's very solid, no rattles, until I turn up the music from the OEM Bose sound system. The Bose sound system causes the headliner to vibrate. Not enough insulation/ant-vibration material was used to prevent this from occurring. The bass from the sound system (in the factory up-graded Bose sound system) is what causes the vibration. At first I thought the speak was blown. But, after listening closer, I find that the headliner is vibrating from the bass reflex of the Bose sub-woofers. I am told I can fix this, but, I just turn down the volume when this occurs. It will not vibrate if I do not turn volume past mid point. Otherwise, the cabin is quiet and little road noise inside the cabin. The tires also aide in this. Michelin tires are on the car.

In the early makes of this generation Altima (2007-2012), there were some problems with the CVT transmission. So Nissan extended the warranty on the 2007-2010 Altima CVT transmissions for 10 years or 120,000 miles. I own a 2010 and my parents own a 2008 model year. Neither car has displayed any problems with the transmissions. However, I plan to drive my Altima to 200,000 miles. Nissans are known for their long service life. I am keeping my fingers crossed that I will not have any issues with the CVT.

This car is among the top choices in it's class. 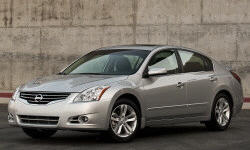 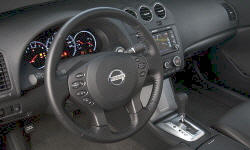