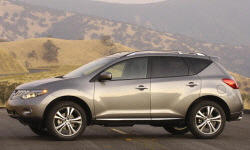 I wouldn't buy it. The CVT in Nissans are known to fail. The #1 problem with the car is the brakes occasionally become soft and don't provide enough braking force which could be a big problem. You would be better off with a Toyota Highlander (rock solid reliability) or if you want more style, the Mazda CX-9 (only problem is the brake booster). The Mazda will be cheaper used because Toyotas retain their value better.

I looked at Consumer Reports detailed data to see what this car was like - while not horrible its reliablity is not great either. This model scored average reliablity overall for the years 2014-2017. During those years it mentioned average to slightly above average reliablity for minor transmission problems (usually means rough shifting or improper shifting).

Going back to 2009 which is the year you are looking at, it again has average reliablity overall. The engine is above average in reliablity (not much above average, so a few issues in their survey) and the tranmission for major transmission issues is above average as well. Minor issues are average (like rough shifting, improper shifts occasionally, etc.) Other catagories showing average include drive system, fuel system, climate system, suspension, brakes, squeaks and rattles, and power equipment. Much below average is the exhaust.

Why is that one year much worse than 2010? Because it was the first year of the redesign back then. I agree with Lectrofuel after looking over the overall report on the car - there are better 2009s and models out there. However, the CX-9 you have to be careful. Looking at its history from 2017 back to 2008 it never scores above average any year, average a couple of years, and below average every year except for one year in partiuclar - 2009.

In 2009, its one year of above average reliablity owners mentioned below average driveablity (bad shifts, late shifts, etc.), below average paint and trim, below average power equipment, and way below average in car electronics. Not a bad car that year, but other years should be avoided as it has chronic problems with the transmission some years, engine problems other years, suspension and brake problems most years - you get the idea.

Better is the Toyota 4Runner and Hyundai Santa Fe Sport. Back in 2009 the only concerns with the 4Runner is the fuel system and slightly below average driveablity issues as well as brakes. If you go one year newer (2010) everything is average to above average. It is super reliable but you may not like the ride quality as it is truck based. It is more reliable than either the Nissan or the Mazda.

The Santa Fe Sport goes back to 2013 and all the way back to then it is pretty troublefree as well (and being a Hyundai, it is cheaper than anything else mentioned so far). In 2013 car electronics were the only much below average item, and everything else was average or above in the first year of production including overall reliablity, which is pretty good. In 2014 things get even better then on out for this car. Overall reliablity jumps to above average to much above average and basically close to the Toyota 4Rummer in quality as no catagory scores even average except in 2014 where the in-car electronics was average. Everything else in 2014-2017 is above average at minimum.