2008 Nissan Xterra Pros and Cons at TrueDelta: Time to go play in the backwoods and mud by seekerbeta

After a friend took me offroading for the first time to the NWOR (North-West Overland Rally) I got hooked, with permission from my Wife I started looking, and ended up with my Xterra

I love the body look of the SUV, the roof line implies a truck that wants to live offroad, and the agressive front bumper gives hints to what is under the hood. the Bump in the trunk lid hint at the First aid kit hiding underneath, and the fenders flare out from the body to show off the larger wheel/tire package

The Interior is comfortable, but the Cheap plastic panels would be better suited on a cheaper truck, it needs something that says \"im going to take this truck, and work it, and it will not show it at the end of the day\" the lack of an Aux in the base model seems silly, when even the base Sentra can be had stock with it. there is plenty of grab handles, and the vast dash is painted a darker neutral color that doesn\'t reflect even in bright sunlight. the roof space is vast, even my 6\'2\" frame has room to spare, the seats fold flat witht he trunk space, but the fact that the center seatbelt streches right across the center of view of the driver annoys me, retracting it solves that, but it still feels like something could be done batter about that

This truck has power, on the road, or in the woods, the truck never felt like i needed to add something to it, being able to keep up with a fully modded land-rover is no small feat! and it neve felt like it was stretching to pass semi-trucks on the highway

with a 4.0L v6, this truck chugs gas, but it doesn\'t fare as bad as a 4.0L V8 in the Landrover, over similar ranges with similar loads, the Xterra managed 470Kms where the Disco managed only 400

The handling of the truck is amazing, with VDC on driving around town, the truck never left me feeling like it was going to break loose or roll over, and messing around in the woods or the mud, it never felt like VDC was pulling too much away from the truck, low range was acceptable in the trees and mud, but VDC turns off, leaving 2 wheels to spin freely with no power pulled from them.

The Xterra gave me plenty to say, including showing off the great onroad sensibility and the super capable offroad capabilites, i couldn't be happier with my descision to buy this truck.

More About the Xterra 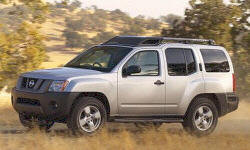 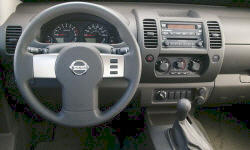