Are you happy with it 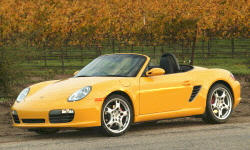 Is the cam bearing problem really that pervasive?

I have had two with over 130k each and no cam problems.

Failure rates vary by model year, but are around five percent. Failure is effectively impossible to predict. Rennlist and Planet-9 are useful forums, and there is no shortage of information available on the intermediate shaft bearing (IMS) issue. Bluntly, you pay your money and take your chance. Good luck.

When I last checked TrueDelta's data on this, the failure rate was about one percent per year. To be conservative, say it's twice that. Over time the IMS probably fails in somewhere between 10 and 20 percent of the cars. I suspect towards the low end of this range, but forum chatter thinks the latter.

First, it's not a "cam bearing." It's a bearing supporting the intermediate shaft. I had mine replaced. Cost about $5,000, but if I'd had nothing but the IMS bearing replaced, it probably would have been about $2,500. But while we were in there, I also had the clutch, flywheel, throw-out bearing and rear main seal replaced, plus some other minor work.

Had I known about the IMS-bearing failure rate before buying an early (2004) Boxster, I wouldn't have bought it. But once I owned the car--and it's a wonderful car--I don't mind having paid to replace it. I'm not particularly price-sensitive, and I really don't care about the ratio between what the car is worth and what I paid to replace the bearing, because I plan to keep the car until it's worn out. I have no idea what it's currently worth and don't care. After all, ours is a 2004 vehicle with 72,000 miles, so it hae plenty of life left. I enjoy owning a first-generation Boxster because it's the cleanest and purest of the line.

I really don't care whether the failure rate is one percent or 20. I didn't want it failing halfway to Newark Airport during a snowstorm at night. I'm delighted to be driving a Boxster that is now probably pretty much bulletproof.

(The bearing that Porsche chose to originally use, by the way, is a GM alternator bearing, which hardly experiences the loads that an IMS imposes.)

I owned a 2001 Boxster S I bought used in late May 2013. I bought the car with 89,000 miles and sold it with 120,000 three years later. I never had an issue with the IMS bearing. My car came with a product from LN Engineering called the IMS Guardian. It was basically a magnetic oil drain plug with a sensor that picked up the presence of tiny metal particles in the oil and sounded and alarm/light if it sensed an issue. It didn't keep a failure from happening, but gave you an indication that something was amiss in the engine in time to shut it off before catastrophic failure. Looking at LN's web site, it doesn't look like they sell the Guardian any longer. LN Engineering has a ton of info on their web site about IMS failures and sells some of the best fixes for the issue.

Had I kept the car longer, eventually the clutch would have needed replacement and I would have retrofitted the IMS with one of LN Engineering's fixes. If you decide on a Boxster, and it has higher miles just drive it and do the IMS when you replace the clutch. Or, find one that's had the bearing replaced. As others have said, the failure rate is pretty low, but it can (and does) happen.

The Boxster is a great car! The first gen (986) is a performance bargain and you'll be hard pressed to find as many smiles for your dollar as with a used 986 Boxster. Just be prepared for high maintenance cost unless you can wrench it yourself. I liked it so much, I upgraded to a 2013 Boxster S. But, I still wouldn't mind having a 986 for a track car.

Thanks I appreciate all the responses. Sounds like ia wonderful car that's worth the risk.

We have had our 98 Boxster for 7 years. When we bought it the clutch was worn so I replaced it and also installed the LN ceramic IMS bearing that was available at that time. Also replaced the rear main seal and have a spin on filter and magnetic drain plug.
We enjoy the simple lines of the early cars and do not regret the purchase. We look at long term ownership and would only consider selling once our older Porsche is finished restoration. Currently have 87,000km.

Do like my neighbor did and pick one up that has IMS already replaced. How long g do they last is not a big deal as he will hardly drive for thr couple months out of thr year.

Like indicated in the prior responses, the failure is not a high probability, but when it occurs, the results are catastrophic. It usually requires a complete engine replacement which will cost you more than the car is worth.